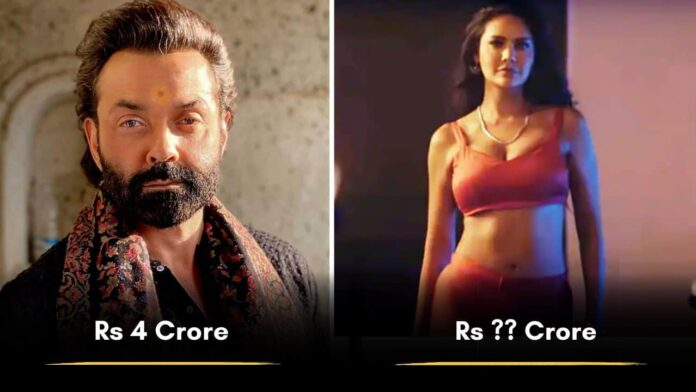 The Aashram series, one of the most well-known shows in India about the controversial topic of godmen, has aired its third season. The first two seasons of Nirala Baba, directed by Prakash Jha and starring Bobby Deol as Nirala Baba, garnered widespread acclaim for depicting the evil side of godmen and the ‘aashrams’ managed by some of them across the country.

Despite mixed reviews for the third season, the show has sparked a debate and awakened people’s eyes to the ‘andhbhakti’ that has afflicted the lives of innocent followers who have fallen prey to these ‘babas” nefarious practises. Here’s a breakdown of how much the show’s skilled star cast got paid this season:

Starting with the principal character, Bobby’s superb portrayal of a ‘dhongi baba’ has wowed both spectators and reviewers who had doubts about his acting ability. According to rumours, the actor received a salary ranging from Rs 1 crore to Rs 4 crores for this job.

The actress, who is reportedly performing ‘brand building’ for the ‘baba’ and his ‘aashram,’ was paid somewhere between Rs 25 lakhs to a crore for her role in this season.

The excellent actor was paid between Rs 15 and 25 lakhs to play Baba’s accomplice in crime and closest comrade, Bhopa.

This amazing actress, who is on a mission to reveal Baba’s dirty deeds, is one of the series’ primary catalysts, and she was paid between Rs 12 and Rs 20 lakhs.

The actor portrays a police officer who goes undercover to uncover the truth about the aashram’s criminal operations. He was recently paid between Rs 15 and Rs 25 lakhs for his role in The Kashmir Files, for which he received a lot of fame.

Everyone applauded her performance as a woman who is exploited by the baba and decides to avenge herself, and she was reportedly paid between Rs 4 and 10 lakhs.

Pammi’s older brother Satti, who is married to Babita and pays a high price for his loyalty to the Baba, is played by the actor who was also seen in Chhichore. For the performance, he was paid between Rs 25 and Rs 35 lakhs.