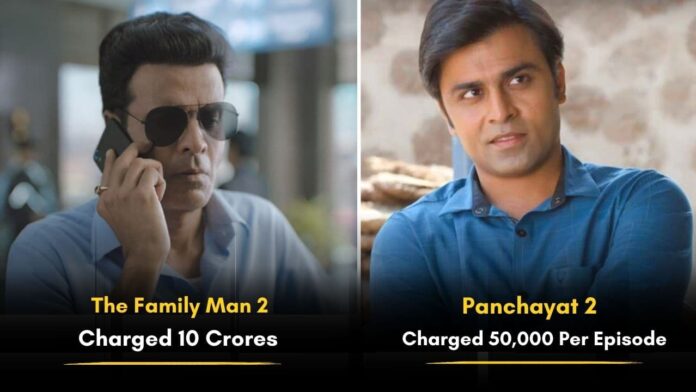 Bollywood is known for its outstanding actors all over the world. Since its inception, it has produced a number of well-known performers. As a result, our Hindi actors have begun to participate in OTT platforms, following the current trend.

There was a time when the pay disparity between big-screen and small-screen actors was enormous. With the emergence of OTT, not to mention the growing popularity of OTT services in general, the gap has reduced, albeit it will never be completely closed (and rightly so). Indeed, some actors may argue that OTT has given them a second opportunity or that their cinematic market has risen as a result of their online success.

Here is a list of OTT actors, from Jitendra Kumar and Manoj Bajpayee to Pankaj Tripathi and Priyamani, with their exorbitant payments:

Sacred Games, a Netflix Original programme starring Saif Ali Khan, was his first step into the OTT platform. Rather than “a web series,” he likes to refer to it as “online streaming media.” For the eight episodes of the show, Saif earned a stunning Rs. 15 crores.

After his most recent films underperformed at the box office, this series helped him get back on track with a good idea. There have been two seasons of Sacred Games thus far.

Tandav, Saif’s follow-up to Sacred Games, is a new OTT film. Tandav drew mixed reactions from the public, as it may have offended some citizens’ religious sensibilities.

Bobby Deol tried a comeback with Race 3, but the film was critically derided; nonetheless, this did not deter him. He then went on to star in Aashram, an MX Original series.

The drama, on the other hand, enabled him not only resurrect his career, but also win Best Actor Web Series at the Dadasaheb Phalke International Movie Festival 2021. The series has received critical acclaim, and it has been nominated for the 20th Indian Television Academy Awards’ Landmark OTT Program category in 2021.

Manoj Bajpayee has nearly two decades of experience in the Bollywood industry. And his Amazon Prime exclusive web series The Family Man allowed him to advance his career while also portraying himself in a positive light on television. He is, without a doubt, a professional actor with remarkable acting abilities. The second season of The Family Man cost Bajpayee Rs. 10 crores.

Priyamani has acted in films in Telugu, Malayalam, Tamil, and Kannada. She also appeared in the 2013 film Chennai Express alongside Shah Rukh Khan and Deepika Padukone.

She rose to prominence in North India after appearing in the Amazon Prime programme The Family Man. In the web series, she plays Manoj Bajpai’s wife, Suchi. She got paid Rs. 10 lac every episode for the second season, which featured a total of nine episodes, for this part.

Due to a scarcity of options, Nawazuddin squandered his shot at fame. However, it was his subsequent films, such as Gangs of Wasseypur 2 and others, that made him renowned. Manjhi, a critically acclaimed film, is also included. He has lately been seen in films such as Raat Akeli Hai and the critically acclaimed Netflix series Sacred Games. For one series, he requested Rs 10 crores.

On Netflix, Radhika Apte appears to have registered a trademark. Radhika Apte was one of the first Bollywood actresses to sign up for Netflix. Lust Stories, Sacred Games, Ghoul, and Raat Akeli Hai are just a few of her OTT films and series. On occasion, she’s been branded “the usual Netflix chick.” For Sacred Games, she was paid a total of Rs. four crores.

Dimple Kapadia is a relative newbie to the realm of over-the-top television. Tandav a political thriller was released in which Saif Ali Khan acted. For Tandav, she charged up to Rs. 2 lac every episode. She appeared in Christopher Nolan’s Hollywood picture Tenet before.

Also Read Richest Bollywood Producers And Their Net Worth

Ali Fazal was still a long way from achieving the popularity and acclaim he deserved after roles in films like Khamoshiyan and Fukrey. At that moment, Mirzapur stood in his path.

Ali acted as a Guddu Pandit character in seasons 1 and 2. He was receiving Rs 12 lakh rupees every episode. The series Mirzapur was crucial in establishing his dominance.

Jitendra Kumar had wanted to be an actor since he was a civil engineering student at IIT Kharagpur. Later, in 2012, he joined TVF. In 2013, Jeetu Bhaiya made his acting debut in Munna Jazbaati: The Q-tiya Intern. Jitendra has demanded Rs. 50,000 each episode for each web show, and Panchayat 2 is no exception. This series has brought in a total of Rs 4 lakh.

Pratik Gandhi has largely worked in Gujarati theatre and films before making it famous in Scam 1992. Raju Pratik got the National Award for Best Gujarati Film for his role in Wrong Side. However, it was Scam 1992 that gave him a new lease on life. Pratik allegedly demanded Rs 5 lakhs for each episode of Scam 1992, according to reports.