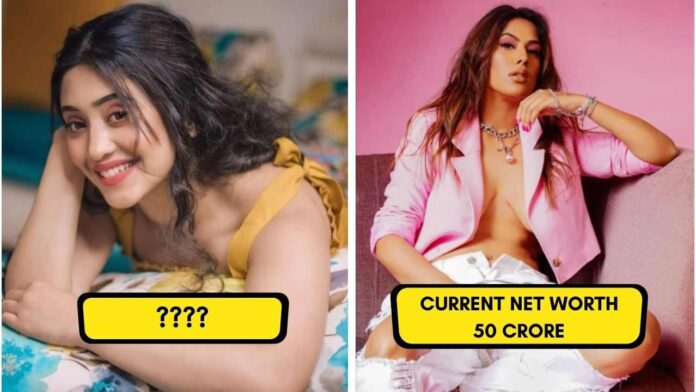 One of the most rewarding experiences for everyone is receiving their first salary after working hard for a month or on a project. We’d never forget the moment, the amount, or how we spent it in our lives. Taking a first step toward the pinnacle of accomplishment and comparing it to how far we’ve come leaves us speechless.

While some people developed slowly, others rose to prominence quickly and saw a dramatic boost in their earnings. Following that, let’s take a look at some well-known television stars’ early wages and employment, as well as how far they’ve progressed since then:

Surbhi began her acting career in regional theatre and films, and she is well known for her roles in serials such as Qubool Hai and Naagin 3. However, before entering the entertainment industry, the actress worked as a radio jockey, earning Rs. 10,000 a month. She now costs Rs. 70,000 per episode as a result of her success as a television actor.

Sanaya Irani rose to recognition and acclaim for her roles as Gunjan and Khushi Kumari Gupta in the television serials Miley Jab Hum Tum and Iss Pyaar Ko Kya Naam Doon? respectively. Though she is now one of the most well-known actors in the television industry, she is said to have started off with a salary of Rs. 7,000 for a modelling job and now costs between Rs. 60,000 and 70,000 every shoot.

Hina Khan rose to prominence as the perfect bahu of Indian television with her performance as Akshara in the serial Yeh Rishta Kya Kehlata Hai, and went on to become the industry’s leading actress. By taking on roles like Komolika, the actress has not only modified her ideal bahu image, but she has also made significant headway in terms of the fees she charges for her outstanding work. Prior to joining the entertainment profession, the actress worked at a call centre and earned Rs. 40,000 per month.

Because of the tremendous renown and popularity that this actress achieved with the daily soap serial Kasautii Zindagii Kay, the first word that we still use to address her is Prerna. She was most likely one of those television actresses that got paid well for her first job!

Yes, the actress’s first official payday, according to some reports, was Rs. 5 lakhs. Receiving such a large sum of money at the time was far more than Shweta had anticipated, and she admitted that she had no idea what to do with it.

With her roles in serials such as Main Lakshmi Tere Aangan Ki, Dream Girl, and Kundali Bhagya, this actress became a household name after acting in a few different language films and Hindi language television episodes. While we were all fawning over this actress’s stunning beauty, she earned her first compensation for her efforts in the promotional film, which was Rs. 10,000. And, as of right now, the actress is earning a hefty Rs. 1 lakh every episode.

Following her appearance as Ishita Bhalla in the serial Yeh Hain Mohabattein, she became an all-time favourite of the audience and is now considered one of the industry’s best actresses. For the record, the actress is believed to have made Rs. 250 from her employment as a host of an All India Radio show. Later in her career as a television actor and in the glam industry, the actress rose through the ranks and currently charges between Rs. 1 and 1.5 lakhs every episode. That is what we refer to as a tremendous transformation.

Shivangi Joshi aka Naira is another actress who rose to prominence thanks to the daily opera Yeh Rishta Kya Kehlata Hai. This actress’s powerful performance is one of the main reasons why viewers are emotionally invested in the show, making it one of the most popular series of all time. When it comes to her first remuneration, the actress is claimed to have received Rs. 10,000 for her first job in an advertisement commercial. And the actress currently earns Rs. 40,000 per episode!

This television actress, who is from Delhi, has risen to become a top-rated actress in the profession, and her name has even been included in a list of the Top 50 Sexiest Asian Women. The actress began her career in 2010 with an appearance in the Starplus serial Kaali – Ek Agnipariksha, and has since risen through the ranks to currently charge between Rs. 80,000 and Rs. 1 lakh every episode. She is even said to demand a staggering fee of 60 lakhs for each brand endorsement.