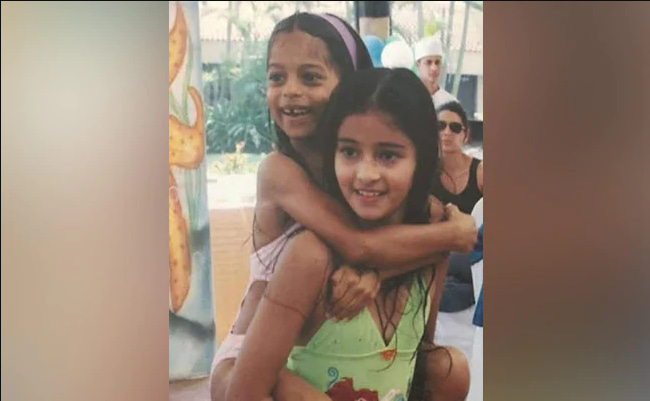 A photo is going viral on social media, in which two small girls are seen. It is seen in the photo that one girl is carrying the other on her back. The girl sitting on the back has broken teeth. These two lovely girls are now the most stylish actresses of Bollywood.

She has millions of fans and in terms of style and glamor, she leaves even big actresses behind. People are trying to identify them. Many people recognize them after seeing their childhood photos, while many still have not been able to recognize them.

Let us tell you that this little girl is Suhana Khan, daughter of Shah Rukh Khan, the Shahenshah of Bollywood. The girl on whose back she is sitting has also become a big actress in today’s time. It is none other than Ananya Pandey and she is Chunky Pandey’s darling. Even after growing up, these two are best friends. Ananya keeps sharing photos with Suhana on social media every day and keeps showering love on each other. Both Ananya and Suhana studied in the same school.

Ananya Pandey has done many films. Recently she was seen in Dehriyaan opposite Deepika Padukone. At the same time, Suhana is now going to debut in Bollywood.

She will debut in Bollywood with Zoya Akhtar’s The Archies alongside Khushi Kapoor and Agastya Nanda. Even before her film, Suhana is in discussion about her beauty and style. He is one of the most popular star kid.