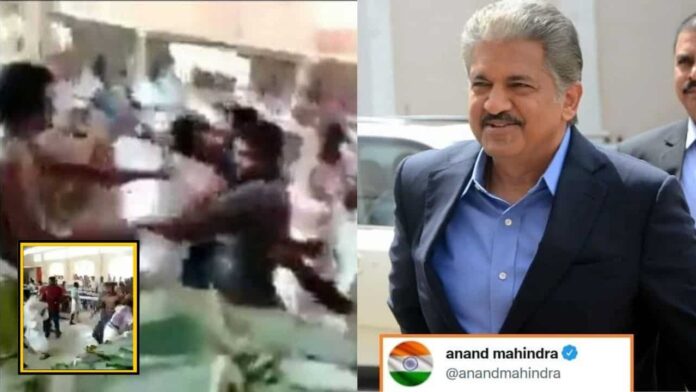 What is the term for a brawl that starts over pappadams? I have no idea, but send any recommendations to Anand Mahindra.

A viral video of a wedding in Kerala that turned chaotic when the groom’s guests weren’t allowed a second helping of pappadam reportedly amused the head of the Mahindra Group. He was curious as to what a fight over pappadams may be named after reading a news article on the occurrence.

“Pappatamasha? Pappaplosion? Pappadhamaka? Anand Mahindra, 67, asked his Twitter followers to come up with a new phrase to describe “a battle over pappadams,” and all of these terms were ones he independently came up with.

“Sometimes we are indeed Incredible India for the most bizarre reasons,” he wrote.

When the groom’s buddies asked for a second helping of papad but were refused, the Alappuzha wedding reportedly turned heated. A verbal altercation between the two factions quickly turned into a fight in which fists were thrown and furniture was hurled around.

The fight resulted in injuries to the proprietor of the theatre where the wedding ceremony was taking place. Furniture and equipment were thrown around by the brawlers, causing damage to his auditorium that is estimated to be worth Rs. 1.5 lakh.

Later, the owner, Muraleedharan, reported the incident to the police, and 15 people were detained as a result.

Punches were thrown at the wedding in Kerala last month over papad, also known as pappadam or poppadam, a crispy food popular throughout the nation.

While this was going on, Mahindra’s search for a new term to describe the pappadam conflicts produced some intriguing ideas, such “Pappocalypse” and “an incident with a result of Pappastrophic Proportions.”