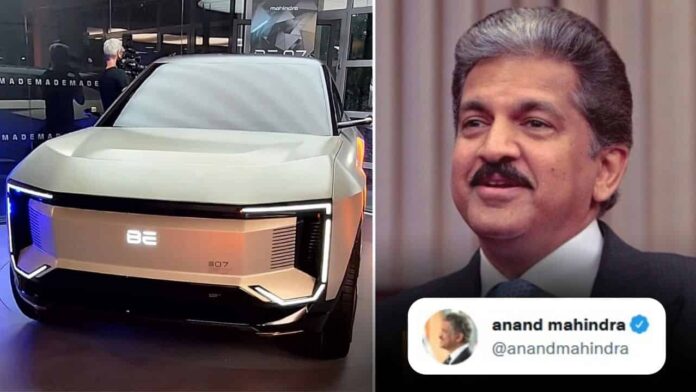 In an effort to dominate the market for electric four-wheelers, the Mahindra Group launched five new electric Sports Utility Vehicles (SUVs) on July 4.

The automotive industry is transitioning from internal combustion engine (ICE) technology, which has been around for more than a century, to battery-powered vehicles, and every automaker, from established players to up-and-coming businesses, is doing their best to stay relevant. This is when Mahindra’s ambitious venture will be implemented.

Anand Mahindra posted several photographs of the 5 SUV models that are projected to go on sale between 2024 and 2026 after making this announcement on Monday. Internet users were in awe of the models, and it appears that the Mahindra Group Chairman was happy with the numerous supportive comments he received.

Anand Mahindra, on the other hand, has chosen to focus on one Twitter user’s response. Her reaction is so wonderful that even Anand Mahindra can’t stop himself from answering her. So, let’s find out more about it:

Bhavna Naik, a Twitter user, responded to Anand Mahindra’s tweet on August 16 by tweeting a GIF of a young child saying “wow” in response to Mahindra’s photographs of five just unveiled electric vehicles.

The 67-year-old industrialist replied to her with a brief comment and included Mahindra & Mahindra Ltd. Chief Design Officer Pratap Bose in his tweet as a mention. He stated in his tweet,

“Got this in response to my tweet with pics of our new EVs. Forget about quantitative consumer reaction surveys @BosePratap From now on, if you get a meme like this in reaction to new products, it means you’ve passed the test!”

Got this in response to my tweet with pics or our new EVs. Forget about quantitative consumer reaction surveys @BosePratap From now on, if you get a meme like this in reaction to new products, it means you’ve passed the test! 😊 https://t.co/SK0dqpQKnL

The most recent offers from the Mahindra Group stunned many people in addition to Bhavna Naik. Look how they respond:

Even an Anand Mahindra would have same expression of round face and round eyes after his first look at his new Baby the BE❤️❤️ST. Hats off to his Taste

Am a proud owner of XUV500 for last 8 yrs, so always look upto to new lineups being launched. But yes, after M&M purchased Reva ages ago, there was a general feeling that M&M would be a pioneer & leader in EV space. Still no regrets….as it takes time to come out with the best.

The two largest automakers in India, Maruti Suzuki and Tata Motors are both investing heavily in the development of EVs. While Tata Motors plans to invest USD 2 billion over the next five years to establish a portfolio of 10 EVs, Suzuki Motor has pledged Rs 10,440 crore to launch its first EV by 2025.