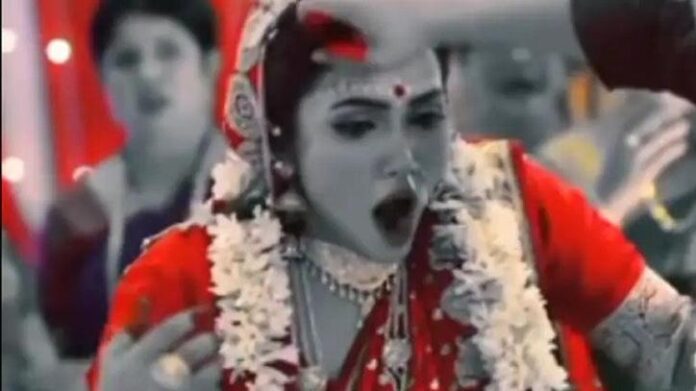 Indian daily soaps are the epitome of odd, and even that is an understatement. A show’s scene will occasionally be used as material for a social media meme.

Indian soap operas have never had anything to do with logic or science, whether it be a woman worshipping the Mona Lisa or a mad husband putting cockroaches in a glass of milk.

People are currently in awe over a scene from a soap show in Bengali.

The groom is being pushed at the altar in the surreal scene from the popular Bengali serial Aye Tobe Sohochori. It’s impossible to comprehend what comes next. A man pulls the groom aside and applies sindoor to the bride’s forehead in the bizarre incident.

How to marry ur crush 😍 pic.twitter.com/qlu4K9OuNV

The scene has obviously been very popular on social media. Users on Facebook and Twitter have widely shared the video. It has received over 3 million views on Facebook.

People are still having trouble understanding the absurd scene.

Thank goodness someone made an effort to understand what happened. “Well, the bride here is his student, who is pregnant with his child, and the groom is a married middle-aged guy. The bride manipulates the entire family and torments them to get married to her professor who has a kid of her age. Simply because she despises the professor’s first wife, who is undoubtedly the model housewife but is mistreated by her husband and in need of support,

In a story twist, the professor was saved from this second marriage by his brother, who had to give up his own happiness to forcefully wed the bride at the last minute.

In a peculiar sequence, Swaran, the female lead, accidentally gets her dupatta caught in a fan while trying to throw it across her shoulders. The noose around her neck grows tighter as the trapped dupatta starts to choke her. The main character, Ajit, is then seen pleading for assistance, which never materialises. In the scene, a woman can be seen attempting to turn off the fan but failing. As Swaran still struggles, the scene becomes very dramatic.

The principal actor seized the opportunity to become the hero. What does he then do? Of course, the male actor bites off the dupatta to aid Swaran in escaping. What more was there to be done, after all?