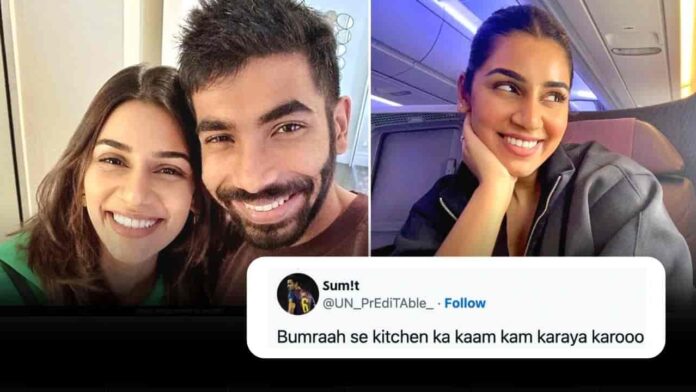 Before the T20 World Cup, which will start on October 16, Team India arrived in Australia. The massive support personnel and the 14-person squad flew out of Mumbai.

India was dealt a severe blow even before boarding the plane for Australia when their star pacer Jasprit Bumrah was forced to withdraw from the major competition owing to a back issue.

The Men in Blue are currently staying at a camp set up by the Board of Control for Cricket in India (BCCI) in Perth, but the Indian team did not name a replacement for the pacer. Instead, captain Rohit Sharma stated that the team management would make a decision once they had evaluated Perth’s weather.

Sanjana Ganesan, the wife of Jasprit Bumrah and an employee of the International Cricket Council (ICC), posted a photo of herself on Twitter on Friday, October 7, just after boarding an aircraft for Australia.

But she would never have believed that a straightforward picture could result in vicious harassment on social media, not even in her wildest nightmares.

Haters trolling her about her husband’s absence from the international event sank to a new low.

Sanjana was singled out by anonymous Twitter users who claimed that she wasn’t the Bumrah they wanted to fly to Australia.

The wife or girlfriend of a cricketer has before been the focus of online trolls when they had nothing to do with the cricketing issues.

Anushka Sharma, a Bollywood celebrity and the wife of former India captain Virat Kohli, has endured years of ruthless trolling whenever Kohli fails to score a major goal.

Mayanti Langer, a well-known host like Sanjana, and the wife of former India all-rounder Stuart Binny have both endured needless teasing anytime her husband has underperformed on the field.