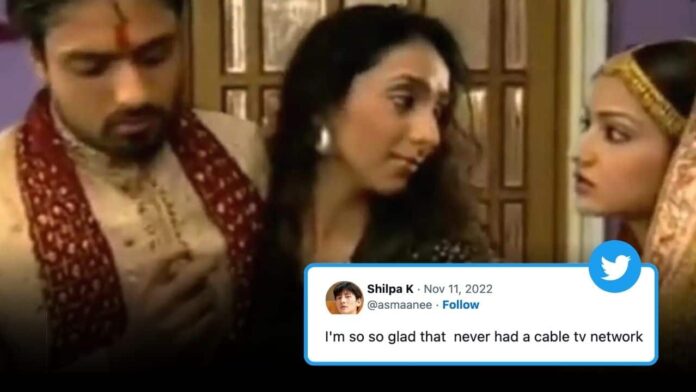 This viral moment in which a guy is seen making out with another lady in front of his wife is the epitome of Ekta Kapoor. they were suhaagraat. The husband and the woman take off their clothing as the bride, still dressed in her bridal attire, sits on the bed and sobs quietly. By the way, that is the only thing that is depicted: their clothing being flung in the bride’s general direction. The fact that this is taken from the 2005 television series “Kaisa Yeh Pyar Hai” makes it much better. In question are Angad and Kripa, the bride and groom.

In the scenario, Angad introduces the other woman and says, “Jo bhi Hoga yahin pe hoga, isi kamre mein hoga, aur tumhari aankhon ke saamne hoga” in an attempt to tease Kripa. Kripa sits on the bed sobbing as things go NSFW between Angad and the other woman because she is afraid of what the family would say if she left the bedroom and is powerless to eject the two. At least NSFW by the standards of 2005.

there is no way- https://t.co/TjEi0kna4X

Does anybody work or know anyone who works for these channels? My one and only wish is to be in the room when ideas like these are conceived and approved. Make it happen. Please. https://t.co/QJR1qm7duZ

In Desi soaps, everything is done to the absolute nth degree. For instance, take a look at a popular sequence from the Dangal TV movie “Ishq Ki Dastaan Naagmani” that features Shankar falling off a terrace and cartwheeling in the air. Following him, his wife Paro glides through the air like Superman till she grabs hold of… a kite. which is physically larger than she is. Shankar snatches her free hand and pulls her closer to the kite. Dramatic music is playing as people on the terrace watch in fear, etc. In the end, the day is saved.