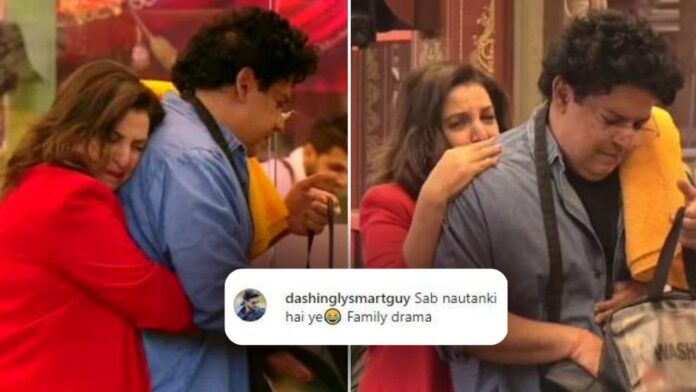 Those of you who are Bigg Boss 16 fans, get ready for a fantastic week. Family members of the contestants visit them as the competition draws to a close to give them a morale boost. We now have a promo after informing you that Farah Khan, the sister of Sajid Khan, would participate in the family week in the BB 16 house. After telling her brother Sajid Khan that their mother was proud of him, Farah, however, received vicious trolling.

Farah Khan will join the house during the next family week on Bigg Boss 16 to stand with her brother Sajid Khan. A recently published promo shows Farah giving Sajid a bear embrace, at which point both start crying. Farah later reveals to Sajid that their mother is pleased with him. This didn’t sit well with online users, who teased the director. Netizens attacked her in the comments area, saying she had nothing to be proud of. For those unaware, Sajid Khan has been accused by several women amid India’s #MeToo controversy.

HOW NETIZENS TROLLED FARAH AND SAJID

Netizens bashed Farah Khan after she told her brother Sajid Khan that their mother is proud of him. Taking to the comment section, social media users dropped comments like,

In preparation for the Bigg Boss 16 family week episode, Farah Khan has been filming. She revealed that she had discovered three more brothers in MC Stan, Abdu Rozik, and Shiv Thakare, acquaintances of Sajid Khan. Furthermore, Farah referred to Priyanka Choudhary as the Deepika Padukone of the household. She also bought a burger, khatta aloo, yakhni pulao, and pulao for Abdu. Shalin Bhanot was referred to by Farah as “the Shah Rukh Khan of BB 16.”