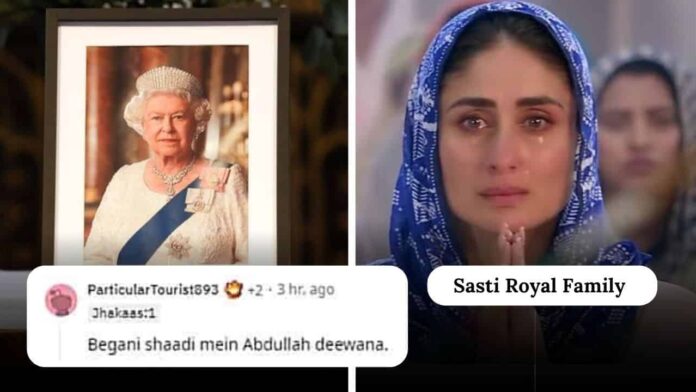 The world reacted differently when it learned that Queen Elizabeth II, the UK’s longest-reigning queen, had died. Some offered condolences, some made tributes, and Indians generally reacted with grief or wrath, but my personal favourite was apathy.

Just to remind everyone how far back we go with the Queen, India was colonised for many years by the East India Company until we ultimately drove them out and won our independence. Therefore, to say that one was unconcerned by the death of the UK monarch was a little bit of an understatement.

Something that Bollywood diva Kareena Kapoor Khan conveniently overlooked when she recently shared a photo of King Charles in tribute to Queen Elizabeth.

And it’s clear that social media didn’t take it too kindly.

People criticised the actress for her post and called her out for having “lost her roots.” And the fact that Indians still hold these people in high regard by referring to their offspring as “nawab prince and princess,” as one user put it, “shows that we never learn.”

A few people also made fun of the Pataudi dynasty, saying that they deserved to be called “Nawabs” because they colluded with the British. “Well, Saif’s ancestors were Afghani tribal chieftains who were granted the “nawab” title and the Pataudi province by the British East India Company for supporting them and aiding them in their fight against the Marathas in the Anglo-Maratha war of 1804″, a user said. They weren’t really subcontinental aristocrats, after all (so much for the eugenics). There is a cause for Saifu and Begum’s “KKK” to recognise their colonial rulers.

It appears that Bebo’s year won’t be all that fantastic, either professionally or personally.

Neha Kakkar Reacts To Criticism On Remix Of Falguni Pathak’s Song After Getting Trolled, Click

8 Celebrities Who Are Likely To Become Bigg Boss 16 Contestants, Click