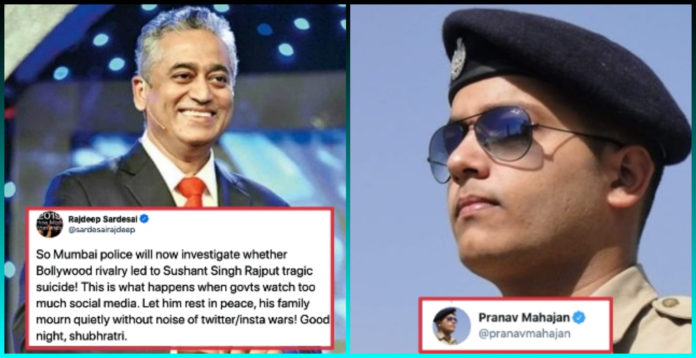 Bollywood actor Sushant Singh Rajput was found dead at his residence in Bandra in Mumbai on Sunday, 14 June. Following Sushant ‘s death, with much discussion and speculation about his death, media and social media were abuzz.

The Mumbai Police took his body for post mortem according to the procedure, and an inquiry was launched. Yesterday home minister of Maharashtra, Anil Deshmukh also spoke on the matter. Taking to Twitter, Deshmukh reported that while the post mortem indicated that Rajput had committed suicide by hanging himself, the professional rivalry has been suspected. Deshmukh added that in their investigation, the police will test that angle as well.

Rajdeep’s objection to the investigation

Senior journalist Rajdeep Sardesai has shared an objection about the issue after Deshmukh ‘s Tweet. Sardesai wrote that this is what happens when governments are watching ‘too many social media’ and instead the Mumbai police should let Sushant Singh Rajput ‘rest in peace’ and let his family ‘die quietly.’

Police officer Pranav Mahajan, responding to Rajdeep, asked what exactly is his problem with an investigation which is the mandated legal procedure. He added that the legislation demands inquiry into the causes behind suicide events.

Bothra has added that the family of Rajput deserves to know the reasons behind his death. Addressing Rajdeep’s claims about ‘letting Sushant rest in peace’ and letting the family ‘die quietly,’ Bothra asked if Rajdeep wanted the police to stop doing their job and let the grieving family be satisfied with what the news anchors were saying.

Rajdeep made an instant U-turn after replying. While clearly objected to the investigation in his initial tweet, he stated in his next reply that the investigation must take place but he was not comfortable with the home minister directing the police to investigate the rivalry angle of Bollywood based on media reports.

Yet Bothra caught his attempt at diversion again. He replied that any investigation into his death would obviously include Bollywood because Sushant was working in Bollywood.

He also added that an investigation into a person’s death should include all aspects, including suicide abetment under CrPC section 306.

Both pointed out to the senior journalist the obvious that the probe on the Bollywood actor’s unfortunate death can not be conducted in his village or in Hollywood, it must be conducted where he worked and lived.

This is interesting here that while several sources have claimed the young actor suffered from depression, his family suspected foul play in his death. The brother-in-law of Sushant, who is a senior Haryana police officer, had suspected foul play and sought a detailed investigation into the case.

Also interesting here is that even if media reports and speculations are ignored, any suicide demands a police investigation and because Sushant’s professional and personal life has been linked to Bollywood, this angle would obviously be involved in the investigation.