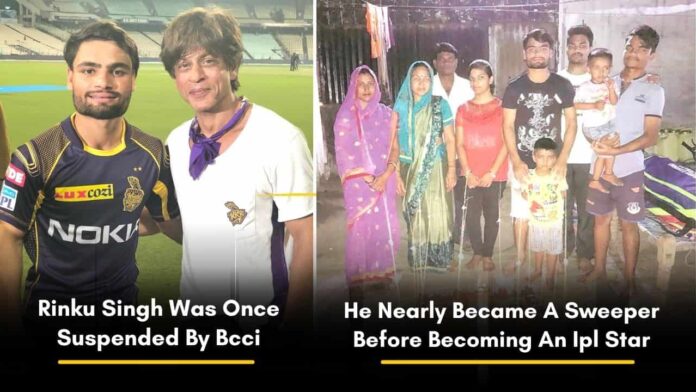 In India, cricket is more than just a game; it is an experience. Cricket has shown to be one of the most effective techniques to gain recognition for several years. Many cricketers come and go, but some leave their imprints on history as well as our hearts.

Rinku Singh, a cricketer, experienced something similar. Rinku Singh, the ‘baby’ power-hitter for the Kolkata Knight Riders who came from humble beginnings, is finally turning heads with his never-say-die spirit. On Wednesday, he came close to leading his club to a surprise victory over LSG.

Rinku Singh was a member of the Uttar Pradesh Under-16 and Under-19 teams before moving on to the Ranji Trophy and domestic T20s. Rinku Singh was first purchased by the KKR in 2017 for a base price of Rs 10 lakh, but his fortune quickly grew to four times that amount, and he was re-signed by the same team for Rs 80 lakh at the IPL 2018 auction.

He has a reputation of being a brilliant hitter in the domestic game, and the KKR management will be counting on him to deliver when the circumstance demands it. Rinku did the same, hitting numerous boundaries and ensuring his team’s victory.

Since then, a lot of people have been discussing about him and his past. So, here’s what we know about him:

1. Rinku Singh was once suspended by BCCI

The BCCI also banned Rinku Singh, something few people are aware of. The Board of Control for Cricket in India (BCCI) suspended Singh for three months on 30 May 2019 after he competed in the Ramadan T20 Tournament in Abu Dhabi, despite the fact that the BCCI does not allow its cricketers to play in any league outside India without prior authorization.

When Rinku was hurt, his father stopped eating because he was the family’s main source of income, and not playing meant not earning, which had a financial impact on the family. In a video broadcast on KKR’s official YouTube channel, he said,

“I wasn’t happy staying away from cricket for so long. My father didn’t eat for 2-3 days. I told him it’s just an injury and it’s part of cricket. I’m the sole breadwinner of my life and when such things happen, it is bound to be worrisome.”

4. He would be sweeper if he didn’t chose cricket over other things

Rinku was escorted to the area where he was to scrub the floor by his brother. He needed work but was not willing to work as a sweeper. He returned home and told his mother that instead of working, he wanted to devote his time to cricket.

Rinku Singh was born into a poor household. Residents continue to receive LPG cylinders from his father. It’s not like we have to give up our dignity to work in this field. However, we are revealing this information about Rinku’s past in order to completely comprehend and appreciate Rinku’s journey. He is the third of five siblings, and his family has struggled in the past. Cricket helped him to have better days in his life.

Rinku was the first Indian Premier League player to be signed by a club in 2017, when Kings XI Punjab paid Rs 10 lakh for him. In 2018, he was sold to Kolkata Knight Riders for Rs 80 lakh, four times his base price of Rs 20 lakh. He is still on the KKR roster.

7. Aligarh is his hometown

8. He has six-pack abs and a slim figure

Rinku is a fitness enthusiast with a thin frame and six-pack abs, making him perfect for any physical activity.