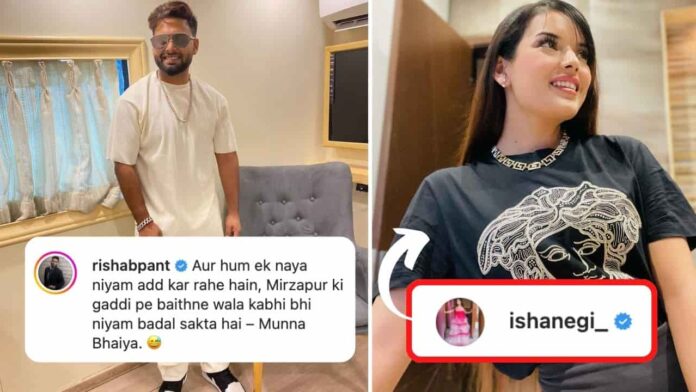 Rishabh Pant, the standout wicketkeeper-batter for India, stole the show after hitting his first ODI century against England on Sunday at the Emirates Old Trafford in Manchester. His amazing batting display enabled India to win by five wickets and take the series 2-1.

Rishabh Pant’s amazing 125* off 113 balls and his 133-run partnership with teammate Hardik Pandya helped India chase down 260 and win the series against England in the last ODI.

On Instagram, Rishabh Pant posted a picture with a humorous line from a Mirzapur discussion.

Rishabh Pant published a hilarious Instagram image the day after the match against England in which he could be seen dressed in a gold chain and posing next to a chair in the “Munna Bhaiya” persona. He posted the image along with a description that quoted dialogue from the web series Mirzapur. As Rishabh noted,

Fans of Rishabh were shocked to see him in a new avatar. The article quickly went viral and swept the internet. It was swamped with comments from his fans.

The comment that stole the show was from his girlfriend Isha Negi.

No one seems to understand the context, so it appears to be an inside joke, but the fans aren’t going down without a fight, so they’re busy speculating.

After Rishabh’s incredible performance against England in Manchester, Isha Negi posted a photo of her boyfriend Rishabh Pant on his Instagram account giving Rohit Sharma the thumbs up.

Pant defended his team when they most needed him, as they were floundering at 72-4 after 16.2 overs with the Indian team. He hit 16 fours and two sixes, and his outstanding performance earned him the title of Man of the Match.

The only Indian wicketkeeper to reach the century mark in a Test in each of Australia, England, and South Africa is Rishabh Pant.

Former Indian batter Manjrekar is all praise for Rishabh, he said,

“No, he’s always responsible. He may seem irresponsible sometimes when he gets out, when he gets out playing one of those kinds of shots, we’ve got to look at it as somebody getting out at slips because the game has changed and that is Rishabh Pant’s primary sort of skill. He’s got to sound different but when he extends himself, he tries these shots. The winning runs, for example, it’s a part of his basic attacking, and array of shots that he has. So, responsibility wise I think this guy is just incredible because of the kind of record he has in test cricket. You can’t play those kinds of shots if you are not responsible by nature, wanting to win the game and in this one day as well you could see him. I got very excited watching Rishabh Pant because there’s something about this country, that we keep producing these kinds of batters every generation,”

We are eagerly awaiting to observe Rishabh’s performance in the future games as the T20I series against the West Indies gets underway on July 29.