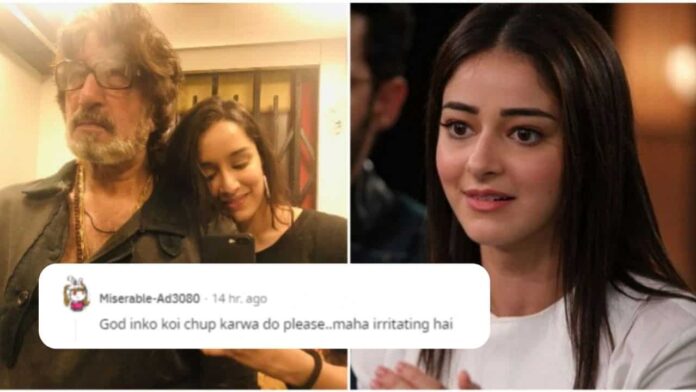 Even though they have always been in the public eye, celebrity star kids have just recently come under heavy criticism. Fans are particularly criticising nepotism by forgoing the films of star kids during the ongoing “boycott craze,” in which individuals find an excuse to avoid Bollywood.

Shakti Kapoor, whose daughter Shraddha Kapoor has also decided to follow the film industry, recently defended the star kids on a dancing reality show by claiming they work hard to get popularity and do not receive things easy because they are famous kids.

He and Chunky Panday were asked to serve as guest judges in a DID Super Moms 3 Comedy Special episode. When congratulating a candidate for her performance, Kapoor used Ananya Panday and his daughter Shraddha Kapoor as examples and added that their fame is a result of their toil and perseverance.

“I must stress that if you don’t put in a lot of effort in your life, you won’t be able to inspire others. In fact, thanks to their perseverance and hard work, our daughters Ananya and Shraddha have become well-known faces in the film industry. It isn’t because they are Chunky Panday’s and Shakti Kapoor’s, respectively, daughters.

“Remo is sitting next to me, and he knows that it was not simple for anyone to complete ABCD 2, but my daughter actually pulled it off,” when recalling how Shraddha would return home covered in bruises while filming Remo D’Souza’s ABCD 2. She certainly put in a lot of effort for her movies since I can still picture her returning home with cuts and bruises on her foot and backache from long rehearsals. She has earned stardom and respect.

Ananya Panday last appeared in Liger, a movie office failure, while Shraddha appeared in 2020 Baaghi 3. Kapoor will appear in Luv Ranjan’s upcoming movie while Panday is in the middle of filming Kho Gaye Hum Kahan.

Her performance in Liger has drawn trolls’ attention as well. She is being made fun of for her subpar performance.

Shakti Kapoor’s statement that Ananya Panday and Shraddha Kapoor have succeeded and gained recognition because of their hard work and not because they are the daughters of well-known people is receiving a lot of criticism in the midst of all of this.

During a conversation with Etimes, “I must emphasise that if you don’t put in a lot of effort in your life, you won’t be able to inspire people. In fact, thanks to their perseverance and hard work, our daughters Ananya and Shraddha have become well-known faces in the film industry. It’s not because they are Chunky Panday and Shakti Kapoor’s daughters.”

Here’s what people are saying.

A Reddit comment stated, “Ironically, Shakti outright requested that actresses sleep with him for a role, and he was caught on camera doing it. There is no way Shraddha should have experienced it. One of the many instances of advantages due to nepotism. What a jerk “.

Another remark stated, “The worst actress to ever grace Bollywood must be Ananya Pandey. She lacks screen presence, is inept at acting and dancing, and is, in my opinion, both ordinary and stupid. Like, I have no idea what she even contributes.”

“I put in a lot of effort and I beat millions of other sperms… A significant accomplishment, “the fan said.

Another supporter remarked, “Struggler Panday is here entirely because of her father’s ties within Bollywood.”