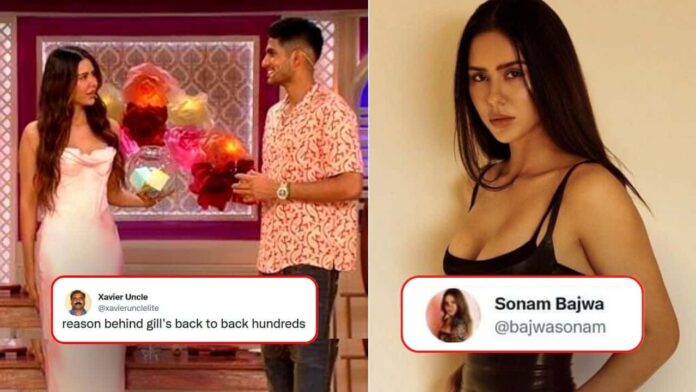 Right-handed batsman Shubman Gill plays for India’s national cricket team. The 23-year-old served as the India U-19 team’s vice-captain during the 2018 Under-19 Cricket World Cup. Since then, he has advanced professionally.

Shubman Gill created history on January 19 when he hit a double century against New Zealand in the maiden One Day International at Hyderabad. Shubman became the fifth Indian to score a double century and the youngest with his 208-run knock. The other Indian batsmen who broke this record were Sachin Tendulkar, Rohit Sharma, Virender Sehwag, and Ishan Kishan. Fans have hailed Gill for his accomplishment.

Now, the hype around Shubman Gill is not just centred on his match results; during the IND vs. NZ game, there were moments when his supporters cheered him from the stadium with “Sara Sara” chants.

Do you know why? Since dating Sachin Tendulkar’s daughter Sara Tendulkar, Gill has remained out of the public eye. However, more lately, the young man has been frequently seen with another Sara, this time Bollywood actress Sara Ali Khan, who is the daughter of Saif Ali Khan.

His admirers and followers joined in on the jokes with the “Sara Sara” punch because he has been linked to ladies with the same name.

When a Twitter user posted a photo of Shubman Gill and Punjabi actress Sonam Bajwa, a rumour began to circulate. Everything began when Gill was recently highlighted in a chat show advertisement by Sonam Bajwa. When posting the show’s image to Twitter, the user wrote,

“reason behind gill’s back to back hundreds”

Gill and Sonam may be seen shaking hands in the picture. The internet was outraged by Sonam’s humorous response to the tweet.

Sonam intended to use the name Sara because Gill had revealed on her show that he is dating a woman named Sara but had withheld her last name. There have already been allegations linking Gill to social media star and Sachin Tendulkar’s daughter Sara Tendulkar.

In the midst of these rumours, a photo of Gill with Bollywood actress Sara Ali Khan caught the media’s eye. The picture quickly gained popularity online. Sara Ali Khan and Shubman were seen having lunch together in the snapshot, which a fan took and shared on social media.

Sara Ali Khan was then seen with Shubman at the airport in Jaipur. However, neither of the two has disclosed their relationship or offered an explanation for their apparent liaison.

The fascinating thing is that Shahneel, Shubman’s sister, enjoys a lot of Sara Tendulkar’s Instagram posts and follows Sara Tendulkar.