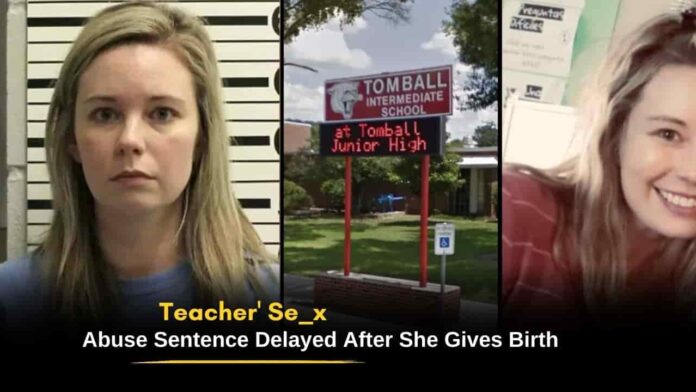 After giving birth, a Texas teacher who admitted to having se-x with a 13-year-old student in her classroom had her sentencing postponed.

Prosecutors had hoped for a term of up to 40 years in prison for Marka Bodine for se-xually abusing the teen, but instead, she will spend just 60 days in jail.

While working as an English teacher at Tomball Intermediate School, 33 miles north of Houston, the 32-year-old encountered the victim.

The boy informed authorities that Bodine originally started communicating with him through the online game Fortnite, but soon their communication moved offline and into texting, where things got explicit.

According to court documents that the New York Post could get, the pair had se-x soon after he turned 13 years old.

The assault continued for three years, and the teen admitted to authorities that he and Bodine frequently had se-x in her car and in her classroom.

Bodine allegedly filed for divorce from her spouse and moved into the apartment building where her victim resided when the inappropriate connection fell apart.

The harassment came to light after she reported to school officials that a former pupil was harassing her and making threats to hurt himself.

Authorities in the area afterwards investigated Bodine and the boy’s phones and discovered the pornographic texts, along with indecent images and videos.

She eventually confessed to having se-x with the now-16-year-old young man to the police.

Due to the recent birth of her child, Bodine’s sentencing has been postponed despite being charged with one count of ongoing se-xual abuse of a child. The child’s father is not the teenager.

Bodine will serve 60 days in prison and be required to register as a se-x offender.

The majority of the investigation suggests it has been between two and a half and three years, Tomball Police Chief Jeff Bert previously stated to KRIV in April 2021 when speaking about the case.

“It does seem like grooming of the child was involved in this situation; in other words, getting the individual to feel first trusted.”

Bodine was “put on administrative leave, resigned,” and was no longer working with them once the charges were made public, the Tomball Independent School District claimed in a statement at the time.

Male Survivors Partnership offers assistance to adult male survivors of rape and se-xual assault. The organization’s free helpline is 0808 800 5005, and it is open from 9 am to 5 pm. Monday, Wednesday, and Friday, 8 a.m. to 8 p.m 10 a.m. to 2 p.m. on Tuesdays and Thursdays Saturdays