As and when we encounter difficulty while using a food delivery service, the first thing most of us do is a bug the company customer care until they sort out our problem.

But talking  with customer service can be an irritating experience. It becomes a continuous back and forth between computerised voices, hearing to some god-awful background piano tune for an hour before you give up and cut the call.

But something completely different occurred when this guy contacted Zomato’s customer care. Have a look at the conversation below: 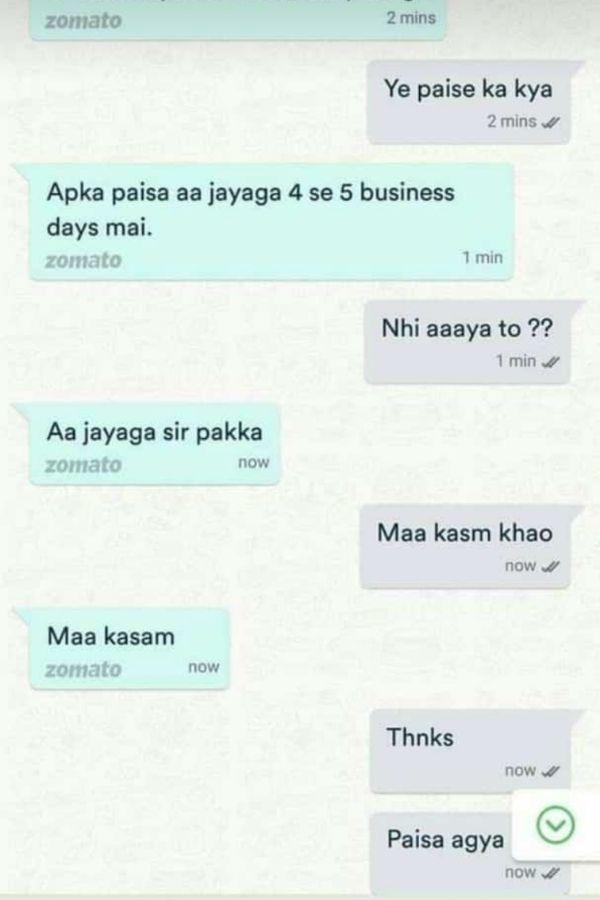 The funny conservation left the Internet in cracks. We’re too sure that not most of the people demand customer care executives say ‘Maa Kasam‘ when requesting for a refund.

Zomato: You’ll have to place a new order, sir.

OP: What about the money I paid?

Zomato: It will be refunded to you in 4-5 business days.

OP: What if it doesn’t happen?

Zomato: It will sir, don’t worry.

OP: Thanks. I received it.

This is not the first time Zomato’s officials and their communications have gone viral on social media. Back in 2016, Pankaj Chaddah, the co-founder of Zomato, shared a snap of a conversation a Zomato user had with an executive and it was straightforward hilarious!

Came across this brilliant conversation between our customer care team and a hungry Punjabi 😂 pic.twitter.com/IcnNHYtBhL

Recently, Zomato came under fire for a video that revealed a delivery executive eating from the boxes of food he was assumed to deliver.

Zomato promptly issued a statement condemning food-tampering and stating that the concerned person has been dismissed. They also said to implement tamper-proof packaging so that such disturbances are not repeated in the future.