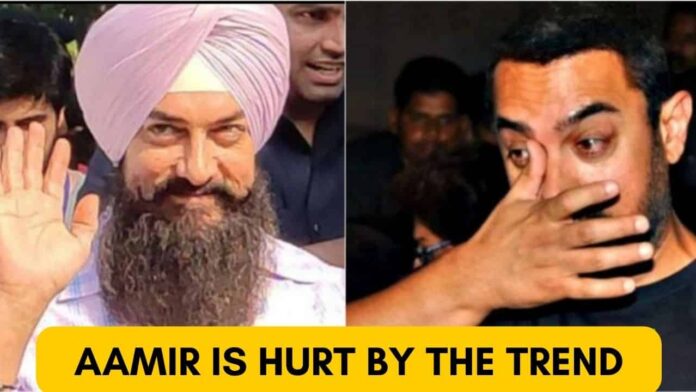 Laal Singh Chaddha, a highly awaited movie starring Aamir Khan, has found itself in the centre of a number of controversies for various reasons.

Many people criticised Khan’s allegedly repeated acting technique in the trailer and decided not to see the movie after finding flaws in what was depicted.

In fact, Laal Singh Chaddha has been a trending topic on Twitter since the release of its trailer, with detractors using the hashtag #BoycottLaalSinghChaddha nearly every day.

Such a persistent negative response from critics is certain to worry Aamir given the time and effort put into the movie and its scheduled release date of August 11.

During a media event for LSC, Khan went into great detail about the film. At that point, Aamir was asked about his opinion on the trending hashtag #BoycottLaalSinghChaddha.

In his response, the actor acknowledged that the controversy surrounding Bollywood and Laal Singh Chaddha “hurts” him.

He stated: “I do feel sorry, yes. Additionally, I find it terrible that some of the individuals who are saying this secretly think I am someone who dislikes India. They have this belief in their hearts, although it is false. That some people feel that way is unfortunate. That is not true. Do not boycott my movie, please. Please view my movie.”

The Twitterverse has called for a boycott of the movie for a variety of reasons, each one offering its own special defences. Certain users used it as fuel to advance the infamous trend because they were offended by some remarks Kareena Kapoor Khan made in a previous interview.

Recall Kareena Khan’s line, “Audience has made us famous, aap jaa rahe ho na film dekhne, toh mat jaao, nobody has forced you (sic) Despite such an insult, if we still choose to watch a movie with her & Butlya, then it’s our problem,” a user said.

Remember the dialogue by Kareena Khan

“Audience has made us stars, aap jaa rahe ho na film dekhne, toh mat jaao, nobody has forced you”

This is what rich kids think, said another user. They are unaware of the difficulties it takes for a regular person to break into the movie industry. We ought to make an example of them. Boycott Bollywood, nepotism, Kareena Kapoor, and Laal Singh Chaddha. ”

This is what privileged kids think. They don’t understand the challenges a common person goes through to become a film star. We should teach them a lesson.#BoycottBollywood #KareenaKapoor #nepotism #BoycottLaalSinghChaddha https://t.co/TxjS9Hys7F

Here is the entire interview with Barkha Dutt so you can make your own judgments, even though it’s simple to misinterpret things by reading Kareena’s comments out of context.

The snippet in question begins at 3:50.

The official Hindi adaptation of the Forrest Gump film from Hollywood is titled Laal Singh Chaddha. Among others, it features Aamir Khan, Kareena Kapoor Khan, Mona Singh, and Naga Chaitanya.

Originally slated for a Baisakhi release, the movie was instead chosen for an August 11 release by its producers.