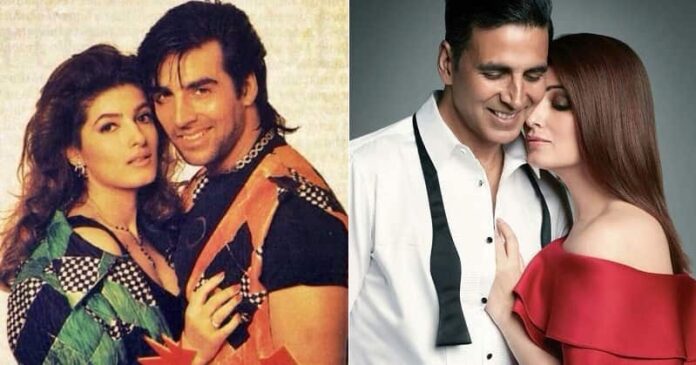 The phrases “lovable” and “jolly” properly characterise our Khiladi, Akshay Kumar. He is a well-known stuntman, actor, martial artist, producer, and TV artist. He has even received numerous honours, such as Filmfare and National Film Awards. Akshay is a self-made actor who thinks that all of his stunts should be performed by him. In addition, he is a loving father and a cute husband in real life. His better half, Twinkle Khanna, is a Star Kid who is a gorgeous actress, designer, skilled blogger, and now a published author.

Akshay worked as a chef and a waiter at a hotel in Bangkok before they met. There, while he was busing tables, Twinkle was getting ready to enter Bollywood as an actress. In 1987, Akshay made his film debut in Mahesh Bhatt’s Aaj, where he had very few roles. Later, in 1990, Akshay became known as a Khiladi and has a number of movies. In the 1995 film Barsaat, directed by Rajkumar Santoshi and starring Bobby Deol, Twinkle made her acting debut.

At the Mumbai photo shoot for Filmfare Magazine, Akshay and Twinkle initially became acquainted. And Akshay fell head over heels for her right away. He even acknowledged this and expressed it in one of the interviews.

“I met Twinkle for the first time during a photo session with Jayesh Seth for Filmfare. I still have that photograph. Thank you, Filmfare!”

They did, however, fall in love while filming International Khiladi.

While some people are drawn to beauty, in their case Akshay was drawn to Twinkle because of her intelligence and other attributes. Twinkle initially assumed it was just a fling and that it would stop by the time the movie was finished, but little did she know that it would lead to their marriage.

In an episode of Koffee with Karan, Akshay once claimed that Twinkle was quite optimistic about the movie Mela when it was released in 2000, predicting that it would perform admirably at the box office and that, if it didn’t, Twinkle would get engaged to Akshay. They quickly got married thanks to the failure of the movie.

Everyone has probably heard the adage “True love doesn’t require many show-offs” at some point in their lives. And in their situation, this was accurate. Amar Singh, a politician, Aamir Khan, and other celebrities attended their wedding, which was held at the home of their friends Abu Jani and Sandeep Khosla. There were also a few other guests.

Now that they have two understanding children, Aarav and Nitara, they claimed that their love, respect, and support are what makes their relationship work so well.

His lady love and his lucky charm

They are currently one of the top couples in the Bollywood industry and an example you can follow. Akshay frequently claims that the sole reason he is a superstar today is due to Twinkle’s unwavering support. She gave up acting to work as an interior designer while still managing her family. What makes their relationship so solid, Akshay was asked on Koffee with Karan. He responded,

“We keep on discovering new things about each other because we are so different. We are poles apart.”

A dedication to Twinkle

He also sang a song specifically for her at the Special 26 music release party. He considers himself extremely fortunate to have her by his side. He stated that Twinkle has always been one of his strengths in an interview with Filmfare, saying,

“Twinkle has not only added to my wardrobe but also to my bank balance. I was a scattered person; she is the one who has put me together. After marriage, she has kind of raised me (Laughs). On a serious note, whenever I’ve broken down she’s given me emotional support.”

In one of his interviews with HT, Akshay also shared,

“Tina (Twinkle) is my best friend. My wife is the best person any man could wish to wake up next to. She holds me up when I’m falling, and puts me down when I’m flying. She makes me laugh when I’m sad, and moans when I am sitting idle. Tina is everything for me. She is my reality check.”

Twinkle isn’t less when it comes to praising her husband. In an interview, she said,

“He really believes in my capabilities as a person and that gave me a lot of confidence to switch jobs. Even today, if I do something new, he ensures he is a part of it. For instance, I have been writing a weekly column in a newspaper for a year now (the interview was conducted in September 2014), but he still reads all my pieces before I submit them.”

Twinkle also mentioned something interesting about Akshay in one of her interviews,

“Akshay’s idea of a romantic date is a six-kilometre jog, followed by 500 crunches… TOGETHER! Eeeeks!”

“It drives me nuts how he has sneakily and steadily wormed his way into becoming my best friend. I like him more now than when I married him!”

Akshay Kumar has always supported his family, whether it be during holidays or other important occasions. For him, nothing is more important than spending time with his loved ones. When he turned 50, he remarked,

“Am I allowed to say it feels as good as it did when I turned 21 (laughs)? I’m really enjoying the fact that I have not only reached 50 alive but also feeling positive about my career, blessed for my health and over the moon with how I’m spending my big 50 on the Swiss Alps with my family.”

Further, Akshay talked about the resolutions he has taken after he turned 50,

“My wife could buy me an island, but I’ll still just want to walk on Juhu Beach (in Mumbai) holding her hand — something we do for free whenever we want, but to me that’s what I call magic.”

Akshay and Twinkle have consistently set the bar high for couples; they have been so supportive and understanding of one another that they have overcome every obstacle in their relationship.