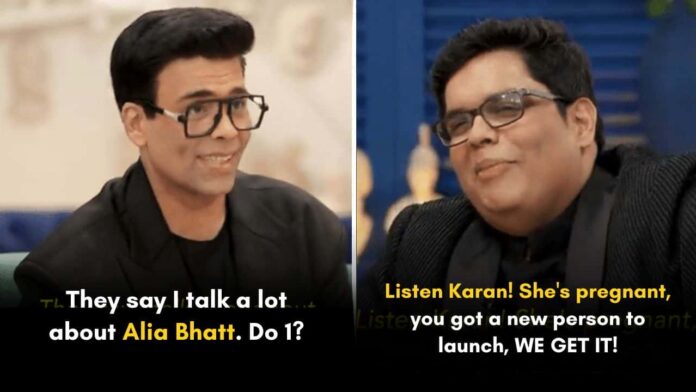 The Koffee With Karan Season 7 award episode, which has Tanmay Bhatt, Kusha Kapila, Danish Sait, and Niharika Nm as the jury, is now available to stream on Disney+ Hotstar. With loads of teasing, Kjo questioning, and humorous audio appearances from Bollywood celebs who won the KwK award, it was a smashing episode.

Here are some of the most heartwarming scenes from Koffee With Karan Season 7’s penultimate episode.

1 When Karan Johar was criticised for “The Alia Bhatt Obsession,” for example.

KJo wanted to go all out at the start of the episode and wanted to respond to constructive feedback. Tanmay Bhatt’s reaction to his question about whether he had spoken Alia’s name frequently throughout this season of KwK was a mic-drop. Furthermore, KJo said that Alia had confronted him about this and requested him to stop referring to her.

2 When Janhvi Kapoor was favoured in the Janhvi-Sara episode, which Karan made fun of.

Immediately following the airing of the Janhvi-Sara episode, there were numerous discussions over how KJo was unkind to Sara and biased against Janhvi. When the incorrect results were displayed due to a technical error, KJo admitted that he had felt awful for Janhvi because she was so happy to have won the hamper. That part, however, was omitted from the finished show and was cut.

3. When KJo shared his embarrassment about not being invited to the Vicky-Katrina wedding.

He described how he was taunted by those who thought he was lying and how they afterwards asked him if everything was okay after realising that KJo wasn’t actually invited.

5. When KJo talked about his anxiety issues.

When Kusha questioned Karan about how he handled the unfavourable things that were said about him online, KJo responded in the kindest way. Eventually, the entire jury rose to embrace him.

6. KJo has a tough time with his ‘funeral wardrobe.’

Prior to watching this KwK episode, I was unaware that there was such a thing as funeral attire.

7. When Sonam had the ultimate response for Karan.

The Brahmastra gaffe by Sonam Kapoor was chosen as the episode’s finest moment. When KJo called Sonam to inform her of this, Sonam’s response was the apex “Are you for real?!”

This pretty much says it all.

9. When Alia Bhatt spoke her ICONIC dialogue from Brahmastra.

Without a doubt, Season 7 of Koffee With Karan was a success. Even though the KwK may not have continued past this year, a new season will begin next year. Are you pumped up already?