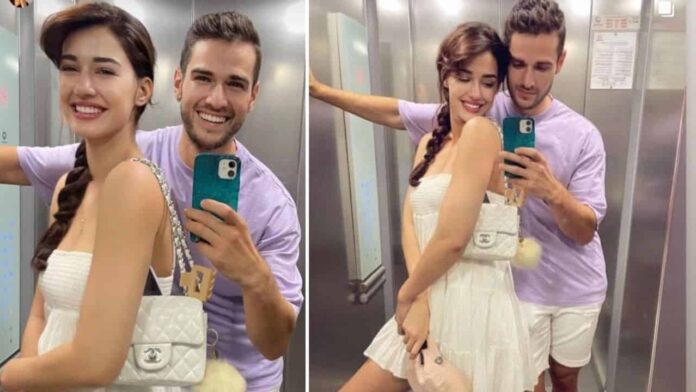 Disha Patani, the Bollywood hot actress who has long been linked up with Tiger Shroff, recently posted some private interactions with a special pal on Instagram. Her Fas have already begun to wonder “what’s Happening” in her life.

Disha could be seen in the images Patani posted on her Instagram stories sporting a stunning off-shoulder white flared midi dress. Along with it, the actress wore a glossy, dewy makeup look.

She kept her hair modest and understated in the photos, adding a braid. The actress was seen grinning broadly as her buddy took candid photos of her in front of the mirror.

Her pal wore a lilac casual t-shirt with white denim shorts, a go-to casual outfit. He was observed grinning broadly as he took pictures inside the elevator.

Her fans are perplexed after a few pictures of the actress with an unknown man went viral on the internet.

Who is Aleksandar Alex Ilic ?

He is a well-known actor and model from Serbia who is now based in Mumbai. He began modelling and acting when he was quite young. He portrayed Moshe in the Girgit television series. He received his diploma from John Naisbitt University.

Disha Patani, Tiger Shroff’s ex-girlfriend, was recently seen out to dinner late at night. It appears that Disha has found love once more after splitting from Tiger. The incident was recorded by the camera, and the social media footage became viral. The footage was uploaded to Viral Bhayani’s Instagram page. In the video, Disha is seen leaving the restaurant after her dinner date with an extremely attractive model and actor who followed her out of the establishment.

Alexander Alex Ilic is the model and actor who appears in the video. Disha went out to supper with this dashing man, as is evident in the video as well. While many claims that Aleksandra Alex Ilic is merely Disha’s best friend, some believe she is only dating him. Alexander is wearing a black shirt, while Disha is dressed in a maroon lace bralette, as shown in the video. Recently, Tiger Shroff’s sister Krishna Shroff and Disha were spotted having lunch together. Krishna and Disha have a tight relationship.

Despite the fact that Tiger Shroff and Disha Patani have never publicly acknowledged their relationship, there was a lot of speculation that the two were dating. Although they never acknowledged it, the couple’s PDA was obvious and their relationship was clearly growing. The two were frequently spotted together, and the ‘rumoured’ pair spent the 2018 New Year’s Eve in Sri Lanka.