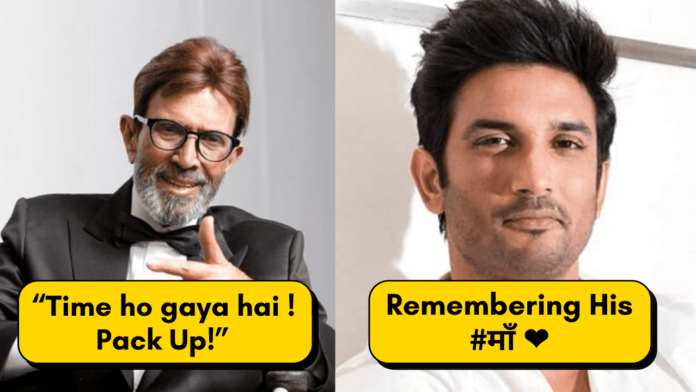 Everybody who is born will have to die. That’s how it all works. Death is life’s final destination, but then it’s a new beginning again. But how is one able to plan for the final moments? When faced with their mortality, what does one say? Are they going to say something insightful and wise to summarise their whole lives? The last words have to be something that can shine a light on their character, giving their lives a reflection. While these prolific Bollywood stars are no longer with us, through their films, speeches, other works, and the way they treated their fans in their lives, their legacy will continue to live on. In some instances, they also continue to release their work posthumously.

So take a look at these Bollywood actors’ final words and messages that will make your eyes teary!

In 2018, Irrfan Khan was diagnosed with a neuroendocrine tumour. He was admitted with a colon infection to the ICU in April 2020. The actor’s mother, Saeeda Begum, who was 95 years old, died just four days before he died. Due to his own illness, the actor could not even attend her last rituals. Irrfan Khan was fighting for his survival, and he told his wife Sutapa in those final moments in the ICU:

Rajesh Khanna, the first Indian film industry superstar. The kind of fame that this late actor was used to at one point in time was witnessed by no other actor. His record of making 15 consecutive solo hit movies between 1969 and 1971 is still unbroken. His health kept worsening after being diagnosed with cancer. The actor passed away in Aashirwad, his bungalow in Mumbai. Amitabh Bachchan revealed the final words of the first Indian film superstar via his blog. The last words of the late actor were.

For everyone, particularly Bollywood, who has lost its gems, 2020 has proven to be extremely poor. Rishi Kapoor was another iconic actor who died in 2020. After reporting some breathing problems, the actor was admitted to the hospital on April 29. On Twitter, the actor has been very involved and has always bravely shared his feelings and thoughts on the website. On April 2, the actor’s last tweet urged the Indians to join together, join hands in battling the pandemic. In the form of a tweet, his last message was:

The legendary actor and singer, Kishore Kumar, felt uneasy and awkward, but he told his family he was alright. He retained his funny and humorous attitude even in his last moments.

“I am alright, but if you call a doctor, I’ll have a real heart attack!”

Battle liver cirrhosis was Meena Kumari, the iconic actress who is remembered for her natural gestures and exquisite beauty to this day. She let her love for her husband be known even though she was fighting for her life. Till her last breath, she wanted to be by his side.

“Chandan, my last wish is to die in your arms.”

The tragic passing of Sushant Singh has left the entire nation in shock. The actor was leaving everyone too early. Sushant was extremely loyal to her mother, who passed away in 2002. His last Instagram post was a tribute to her mother. The actor wrote for her a lovely and heart-touching poem.

Blurred past evaporating from teardrops
Unending dreams carving an arc of smile
And a fleeting life,
negotiating between the two…
#माँ ❤️