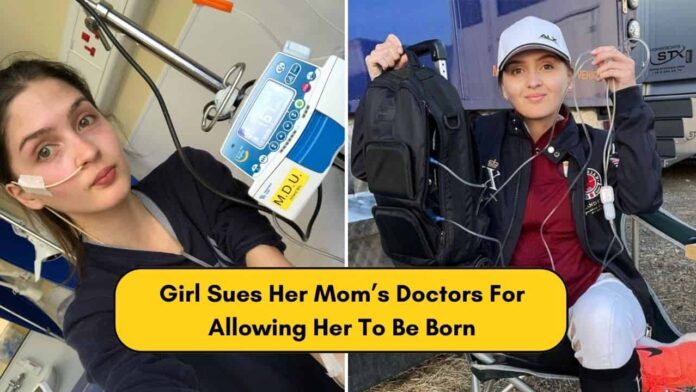 Evie Toombes, a 20-year-old showjumper, plans to sue the general practitioner with whom her mother sought help throughout her pregnancy. She is seeking at least millions of dollars from the doctor who forgot to advise her mother about a key supplement she needed to take before getting pregnant.

Evie did not develop normally as a result of the crucial supplement, and she was “born in a damaged state.” The showjumper, who now lives in Skegness, Lincolnshire, thought that if her mother had been properly counselled, she would not have been born in this manner.

Dr. Mitchell had discussed folic acid with her 50-year-old mother in February 2001, but she was never told that it could prevent spina bifida.

But the GP rejected, claiming that she had given Caroline adequate advice and that she was not responsible.

Caroline’s counsel, Susan Rodway QC, supports her by stating that if the mother had been properly informed, she would have put her pregnancy on hold and would have a better chance of having a healthy kid who isn’t Evie.

“This was a really precious decision to establish a family because she herself had lost her parents when she was young,” the attorney told the judge.

“Until they received guidance at this appointment, they had been refraining from se*ual intercourse.”

“He told me it was not necessary.”

Evie’s mother also stated that she would have waited a little longer and taken more folic acid before becoming pregnant. “I was told that if I had a good diet before, I wouldn’t need to take folic acid,” she stated.

Her attorney added, “It is her evidence that she would have read up on it and wouldn’t have attempted to become pregnant until she was happy that she had protected herself as much as possible.”

In 2001, Evie was diagnosed with lipomylomeningocoele (LMM), a neural tube disorder that results in permanent impairment. She suffers with bowel and bladder troubles and occasionally requires the use of a wheelchair. As she grows older, her condition will force her to use a wheelchair more frequently.

Evie has been a champion for spina bifida patients and appeared in “Hidden Disabilities: What’s the Truth?” despite her “extremely restricted” mobility.

For the annual WellChild awards in 2018, Evie Toombes spoke with the Duke and Duchess of Sussex, Prince Harry, and Meghan Markle.

Evie competes in showjumping on a national and international level, as well as giving speeches to students at Nottingham University about invisible disabilities. She also frequently proclaims her life slogan, “Find a way, not an excuse.”