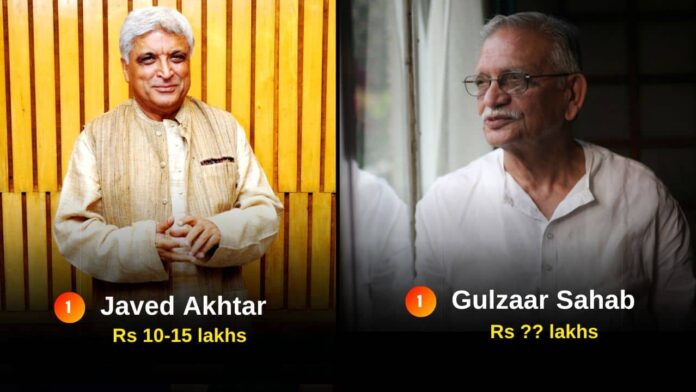 Unbelievably, a song’s words are what endow it with iconic and lasting qualities. Unfortunately, originality in music is at best a ridiculous joke because the majority of songs today simply copy or “sample” music from other works. Mostly, though not always.

The assumption that brilliant lyricists charge a lot of money for a song shouldn’t come as a surprise, then. Lyricists, on the other hand, make pennies when you consider the whole budget of a movie and how much music directors get paid for “sampling” other tracks and “creating” new music. In all honesty, we believe they ought to be charging more considering how much they contribute.

Here are The topmost lyricist charges for each song they pen down.

Sudhakar is a Bollywood lyricist and composer who was born in Ambala in 1955. He earned his bachelor’s in arts from the University of Delhi. Additionally, he belongs to the Association of Film & Television Directors. His most well-known songs include Pyaar Kiya To Darna Kiya, Bandhan, and Humsafar.

Faiz Anwar is a Bollywood producer and songwriter who was born in Kanpur in 1965. In the beginning, Sonu Nigam, a well-known singer, benefited from his lyrics. His well-known films include Saajan, Imtihaan, and Dabangg.

Amitabh Bhattacharya desired fame as a singer. But what made him well-known were his lyrics. One of the most celebrated lyricists in history, he has also received the prestigious National Film Awards for his outstanding work.

Charge for each song- Rs 7-8 lakhs

He began his career in 2004 as a songwriter for the movie Chameli. Over the years, he provided us with a wide range of memorable songs that were a part of films that were well-known for their soundtracks.

Charge for each song- Rs 8-9 lakhs

Given his role as the Chairman of the Central Board of Film Certification, Prasoon Joshi is one of the most gifted lyricists that we have had the pleasure of growing up listening to. He also wrote some memorable ad jingles. He was one of the most compensated lyricists in Bollywood before to accepting his position at the CBFC.

Javed Akhtar’s abilities as a lyricist don’t need an introduction. He truly is a master at what he does. For the songs he has written over the years, he has won numerous Filmfare and National Awards. Javed Saab bases the price of his tracks on how challenging the music is.

There is no point in disputing the fact that Gulzar Sahab is a gift to Indian cinema. He wrote some of the most moving songs we’ve grown up listening to and is most known for his lyrics. Given that he has an Oscar to his name, he charges a significant amount for his services. Without a question, one of the best-paid lyricists in the Bollywood business is Gulzar Saab.

Swanand, a playback vocalist, lyricist, actor, and dialogue writer for Bollywood films, was born in 1970. At the National Drama School, he also studied acting. With the movie Martyr Bhagat Singh, he launched his career as a dramatist. He started working for the Hazaaron Khwahishein Aisi as a songwriter in 2003.

Charge for each song- Rs 6-7 lakhs

A well-known Bollywood author is Sameer. His real name is Shitala Pandey. He received his degree in commerce from Banaras’ Hindu University. He began his career as a bank officer at the Central Bank. He got his start in 1983 writing the lyrics for the film Bekhabar.

He holds the record for writing the most lyrics, according to the Guinness Book of World Records. He has composed more than 4000 songs. A biography of him, written by Derek Bose, was published in 2007.

Vishal is a poet, actor, and director of Bollywood music. He has worked in the Hindi, Tamil, Telugu, and Malayalam film industries. He used to be the lead singer for his band Pentagram. He has been collaborating with Shekhar Ravjiani as a music director since 1999. He has also been honoured with Filmfare and International Music Awards for his efforts in movies.

In addition to being one of the most paid lyricists, he appeared in cameo roles in movies like Om Shanti Om and Tees Maar Khan. He achieved famous thanks to the excellent music and lyrics he wrote for movies like Jhankaar Beats, Dus, Bluffmaster, and Bachna Ae Haseeno. His primary line of work is as a guitarist, however he has also.