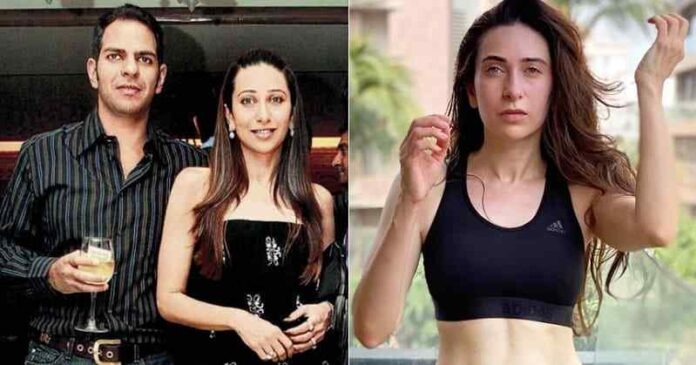 There was a time when Bollywood actress Karishma Kapoor was at the top of her game. She has proven her abilities and capabilities in films such as Coolie No. 1, Dil To Pagal Hai, Raja Hindustani, Biwi No. 1, and Hero No. 1, which are both memorable and commercially successful.

When she married Indian billionaire Sunjay Kapur at the height of her career, however, the actress decided to stop acting. However, things did not go according to plan for the star, who began having issues with Sunjay shortly after their marriage, and some of the specifics are quite disturbing.

Another happily ever after marriage has devolved into a nightmare.

Karishma has had a lot of troubles since the beginning of her marriage, despite the fact that it was a love marriage.

Karishma was allegedly subjected to a tremendous lot of domestic violence by both Sunjay and his mother, according to reports. Karishma explained to Jagran that her life altered tremendously after she married since she encountered major challenges on a regular basis.

Sunjay tried to sell her on their honeymoon, Karishma said when questioned about her worst memory from the marriage, which ended in 2016.

That’s right, you read it accurately. After going over everything, it appears to be a disaster. Consider what she had to go through.

According to Karishma, Sunjay began abusing her as soon as they married, and on their honeymoon, he tried to force her to sleep with his pals. When Karishma refused, Sunjay be*t her up and even told one of his pals about her price. But the storey didn’t end there.

Sunjay Kapur, Karishma Kapoor’s husband, had a physical contact with his first wife after they married, according to Karishma Kapoor. He and her were also sharing a residence. When Karishma questioned him, he assaulted her.

Karishma Kapoor had to deal with a lot of stress during her pregnancy.

When she was pregnant, her mother-in-law gave her a dress that she couldn’t wear because of her pregnancy. Her mother-in-law and Sunjay, on the other hand, physically abu*ed her instead of buying her a new clothing. Sunjay, to her surprise, also smacked her.

According to insiders, the situation had deteriorated to the point where Karishma chose to flee Sunjay with her children in 2012. After a 13-year terrible marriage, she filed for divorce from him and eventually divorced him.

Their two children, Kiaan and Samaira, were the subject of a long and acrimonious custody battle in family court. Karishma eventually won custody as their divorce became more acrimonious by the day. Many accusations were levelled, including Karishma Kapoor’s claim that her ex-husband was living with his girlfriend, Priya Sachdev, who is a major source of contention between the ex-couple.

Priya Chatwal, an ex-wife of Vikram Chatwal, an NRI and successful hotelier, is a model-turned-entrepreneur. Her daughter’s name is Safira, and she had her with her first spouse.

Sunjay, Priya, and Priya’s daughter Safira take travels to exotic destinations on a regular basis, and they even post photos of their adventures on Instagram. She can’t stand such profanity and boldness. It all comes down to self-respect, and Karishma has had her fill of it.

Karishma had a lot on her plate. Many blessings to her, and I hope she is now living a more fulfilling life.