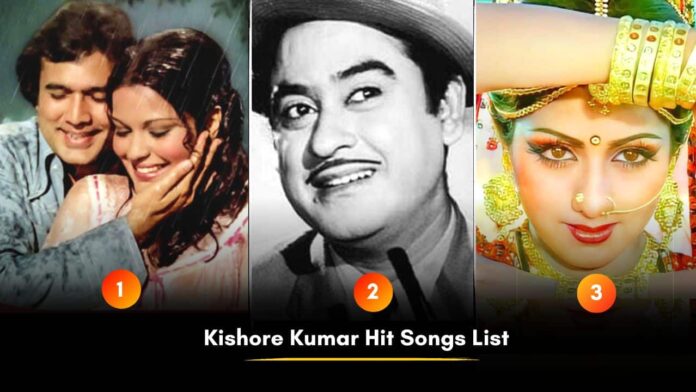 One of the most renowned Indian vocalists of all time is Kishore Kumar. On August 4, 1929, this renowned singer was born. He performed songs in numerous languages, including Bengali and Hindi. From the 1950s to the middle of the 1980s, he was a popular vocalist. He also has the record for winning the most Filmfare Awards for Best Male Playback Singer, which is noteworthy. The nostalgic music of Kishore Kumar is the kind that makes you feel at peace.

There are still some people who adore Bollywood throwback music, even if many people prefer the cheerful music of today. It calms your frazzled nerves and uplifts your spirits. So, if you’re looking for Kishore Kumar’s best songs, you’ve come to the perfect place.

How can you resist listening to Yeh Sham Mastani on a lovely evening with your favourite folks nearby? This song’s lovely lyrics were written by none other than Anand Bakshi. It is ranked as one of Kishore Kumar’s best older songs.

Check out Yeh Sham Mastani by Kishore Kumar on YouTube.

You only need to listen to Pyaar Diwana Hota Hai by Kishore Kumar if you’re looking for the definition of love. R.D. Barman wrote the music for this song, and Anand Bakshi wrote the lyrics. This song is from the romantic collection of Kishore Kumar songs.

Ek Ajnabi Hasina Se is a song by Kishore Kumar that is impossible to overlook. In this popular love ballad from the 1990s, Zeenat Aman and Rajesh Khanna appear.

The lovely duet Haal Kaisa Hai Janaab Ka was performed by none other than Asha Bhosle and Kishore Kumar. In this captivating song, Madhubala and actor Ashok appear.

Kalyanji-Anandji composed Kishore Kumar’s Pal Pal Dil Ke Paas. Dharmendra and Rakhee, who are both actors, star in this charming love story. One of the top 10 Kishore Kumar songs is this one.

Amitabh Bachchan’s Don is one of the most well-known movies ever. Its soundtrack, however, is Are Diwano by the illustrious Kishore da. Zeenat Aman, a stunning actress, is also featured in this well-known song.

Magic always happens when Lata Mangeshkar and Kishore Kumar collaborate. That magic is in Gaata Rahe Mera Dil. One of Kishore Kumar’s most popular songs is this one.

Another extremely well-known song by Kishore Kumar and Lata Mangeshkar is Tere Bina Zindagi Se. It comes from the film Aandhi (1975).

This 1968 song by Saira Banu and Sunil Dutt was a huge hit. This Kishore Kumar song does a great job of capturing how love blossoms at first sight.

One of Kishore Kumar’s songs with a deep meaning is Zindagi Ke Safar Mein. It comes from the movie Aap Ki Kasam in 1974.

It is a heinous crime to breathe without listening to Zindagi Ek Safar Hai Suhana. The gorgeous music featured here is from the 1971 movie Andaz.

O Soni Meri Tamanna is a beautiful song by Asha Bhosle and Kishore Kumar, two musical legends. It’s one of those songs that you should absolutely enjoy with your significant other.

When it’s raining outside, the song Rimjhim Gire Sawan is the ideal one to listen to. It is a flawless story with captivating music by Lata Ji and Kishore da.

Everybody has to keep moving forward since life is a journey. The Kishore Kumar song Musafir Hoon Yaron is the one that perfectly captures it.

Kishore da not only wrote the song “As Chal Ke Tujhse,” but also sang it. It would be an extreme understatement to call it gorgeous.

Yeh Dil Na Hota Bechara is the next song on our list of the top 50 Kishore Kumar songs. It is another exquisite piece by R.D. Barman.

Those who are intended to be together will undoubtedly cross paths at some point. Ham Hai Rahi Pyaar Ke by Kishore Kumar’s finest captures this. It comes from the Nau Do Gyarah movie of 1957. It is listed as one of Kishore Kumar’s top songs.

The beautiful song Aanewala Pal Janewala Hai by Kishore Kumar can be heard in the 1979 film Gol Maal. This song shows us how the greatest way to live is in the present.

The song Bheegi Bheegi Raato Mein, which stars Rajesh Khanna and Zeenat Aman, is incredibly romantic and gloomy. This is one of those Kishore Kumar songs that once more showcases Lata Mangeshkar’s enchanting voice.

Yeh Jo Mohabbat Hai by Kishore Kumar might be an extremely upbeat song for you if you are going through a dismal stage in your love life. It is unquestionably one of Kishore Kumar’s finest songs.

Check out O Sathi Chal by Kishore Kumar on YouTube

Bachna Ae Hasinon is the 25th song on our list of the top 50 Kishore Kumar songs. Later on, a version of this song was produced. We all understand, nonetheless, that an original piece is unquestionably original.

Listen To This Song Here

It’s nice to be told how gorgeous you look. But saying “Tere Chehre Se Nazar Nahin Hatt’ti” is very another. Do take a moment to listen to this lovely song by Kishore da and Lata Ji.

One of the most popular songs from old Bollywood is Nainon Men Sapna. It stars the stunning Sridevi and dashing Jeetendra.

Check out Roop Tera Mastana by Kishore Kumar on YouTube

This song is from the Raampur Ka Lakshman movie from 1972. The voices of Lata Ji and Kishore da are “to die for.” This song is one of Kishore Kumar’s greatest.

It is a blessing to have music to listen to while you’re feeling lonely. That one song is Mana Janab Ne Pukara Nahin by Kishore Kumar.