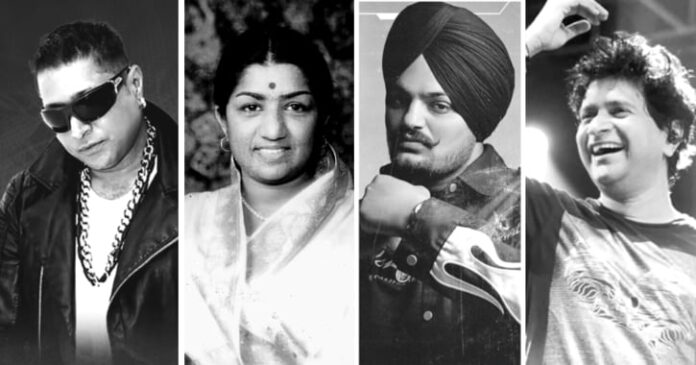 Life is said to be an open book, and most celebrities’ lives are practically out in the open for public scrutiny. They can’t enjoy their privacy like commoners, from what they’re working on to who they meet, from their heartbreaks to their hardships. Their sudden demise, on the other hand, comes as a shock.

Many musicians have left the music industry this year. These legendary singers, who we grew up listening to and whose music was an important part of our lives, passed away abruptly, leaving voids in our hearts. The music industry has had a bad year this year. The following is a list of notable singers who died in 2022.

Iconic Singers Who Passed Away In 2022

It was terrible news for any 90s kid. Taz from Stereo Nation, the pop sensation who made our childhoods fantastic with songs like Pyar Ho Gaya, Gallan Gorian, and Nachenge Saari Raat, among others, died abruptly at the age of 56, leaving everyone stunned and heartbroken. Taz died after a protracted illness. He was recognised for his cross-cultural Asian fusion music. He was diagnosed with a hernia before Covid-19 broke out, but he couldn’t have the operation because of the pandemic. Last month, he was admitted to the hospital and lapsed into a coma. His health was beginning to improve. His followers were informed on March 23 that he was doing well and was no longer in a coma. On April 29, he passed away.

Lata Mangeshkar, India’s most beloved vocalist, who once moved Pandit Jawaharlal Nehru to tears, put the entire nation in tears when she died on February 6th at the age of 92. She was brought to the hospital on January 11 for Covid-related problems and pneumonia. After suffering from multiple organ failure, she died.

Bappi Lahiri, a legendary singer and songwriter, died on February 15th at the age of 69. The singer who popularised disco music in India in the 1980s and 1990s, known for songs such as Bambai Se Aaya Mera Dost, Yaar Bina Chain Kahan Re, Raat Baaki Baat Baaki, and Yaad Aa Raha Hai, passed away in Mumbai’s CritiCare Hospital after severe health concerns.

His admirers are still reeling from his loss. On May 29, Sidhu Moose Wala was shot dead in broad daylight in a busy marketplace in Punjab, with 30 rounds of ammunition fired. He was 28 years old at the time. Goldy Brar, a gangster from Canada, claimed responsibility for his death after his death. Lawrence Bishnoi, a convicted thug, has also been mentioned. The investigation is ongoing, and fans are hoping for a positive outcome.

Minutes after he finished singing, “Rahein ya na rahein kal, rahein ya na rahein kal, rahein ya na r Ayenge ye pal, yaad ayenge “Singer KK, who was a big part of our youth, died at the age of 53 at a concert in Kolkata. Krishnakumar Kunnath, better known as KK, had an underlying heart issue that was compounded by a lack of oxygen, according to his postmortem report. He was the man who made our childhood great with his melodic voice and beautiful melodies.

Sheil Sagar, a Delhi-based musician, died at the age of 22. The cause of death for the singer-songwriter and multi-instrumentalist, who rose to prominence in the independent music industry thanks to his track If I Tried, is unknown. Mr.Mobile Man-Live, one of his tunes, was recorded and filmed live at Gurugam’s Piano Man Jazz Club. His friend tweeted the following after learning of Sheil’s murder on Wednesday: “Today is a sad day… first it was KK, and then it was this lovely young musician who wowed us with his rendition of my favourite song #wickedgames. #SheilSagar, may you rest in peace.”

Pandit Shivkumar Sharma, a Santoor maestro, died on May 10 at the age of 84 after suffering a heart arrest. With his distinctive renditions of the basic folk-music instrument ‘Santoor,’ Pt. Sharma, who was born on January 13, 1938, took the humble folk-music instrument ‘Santoor’ onto the world scene. He formed the Shiv-Hari combo with famed flautist Pt. Chaurasia and created music for a number of films, including Silsila, Lamhe, Chandni, Darr, and others. Pt. Sharma received numerous awards and honours, including the Padma Vibhushan in 2001.

At the age of 90, Indian playback vocalist and musician, who specialised in Bengali music, passed away on February 15th owing to age-related diseases. She was a pupil of classical music icon Bade Ghulam Ali Khan, and was born and raised in Kolkata. She began her career in Bollywood as a classically trained musician, singing in 17 Hindi films. She later returned to Kolkata and married poet Shyamal Gupta in 1966, who authored many of her songs’ lyrics. Mukherjee has won numerous honours throughout the course of her career, including the National Film Award for Best Female Playback Singer.

Pandit Bhajan Sapori, a renowned music composer and Santoor player from Kashmir, died at the age of 74. At Fortis Hospital in Gurugram, he was receiving cancer treatment. “In June of last year, he was diagnosed with colon cancer. Three weeks ago, we admitted him to Fortis, Gurugram, for immunotherapy treatment. It didn’t work for him, and his health began to deteriorate as a result “Abhay, his son, told PTI.