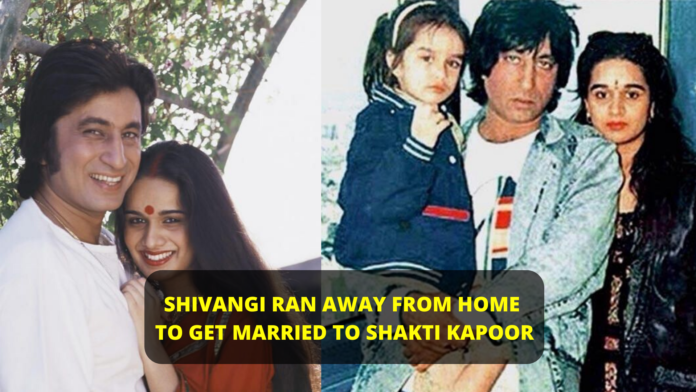 There have been many villains in Bollywood who have carved a niche for themselves and one of them is definitely Shakti Kapoor. He has performed parts of despicable characters in several films during the 1980s and early 1990s. He also played several comic roles later in his career in movies such as Andaaz Apna Apna, Raja Babu etc, which became very successful too. As a comical and evil duo, he teamed up with the late Kader Khan in over one hundred films where his performances were very appreciated. The real-life, however, Shakti Kapoor is diametrically opposite to his life on the show.

Shakti and Shivangi both come from a very different history

Shakti Kapoor was born in a middle-class Punjabi family in Delhi as the Sunil Sikanderlal Kapoor. He enrolled in the Film and Television Institute of India, Pune, after completing his initial Delhi schooling. He graduated from there, moving to Mumbai to pursue jobs. The first part he got was of a villain, and he felt his name did not do the character justice. This is when his name was changed to Shakti Kapoor. On the other hand, Shivangi came from the middle-class Marathi family and grew up in Mumbai. She is the eldest of her parents, Padmini Kolhapure and Tejaswini Kolhapure who were both known Bollywood actresses.

They first met during a 1980 film shoot

Shakti Kapoor had a pivotal negative role in the movie ‘Kismet’ which also had Mithun Chakraborty and Padmini Kolhapure. However, due to issues with dates of her availability, Padmini could not be part of the project. With very little options, the producers of the film signed her elder sister Shivangi Kolhapure, who resembled Padmini a lot and had the same beauty and grace. As it stood, the film was scheduled in a way that both Shakti and Shivangi did not have any scenes together and had different shooting dates. But with the original shooting being delayed and some other dates issues cropping up, Shakti and Shivangi were allotted the same dates for the shoot.

For Shivangi it was Love at first sight

When she did the movie Shivangi was a teenager. She was a newcomer and at that time Shakti wasn’t very well known either. She was very impressed with Shakti and immediately fell for him. Both of them soon hit it off and they were seeing each other by the end of the film shoot. While the film was a dude at the box office, their relationship grew stronger and the birds of young love started dating one to another.

From 1980-1982, for two years, Shakti and Shivangi secretly dated each other. They agreed to tell their respective parents about their relationship once she turned 18, seeking their blessings in order to get married. Shivangi’s father, however, was traditional, and strongly opposed the relationship. They also threatened to disown her if she went ahead with Shakti’s relationship. Just as it happens in a traditional Bollywood love tale, there was no other choice for the young couple but to elope and marry. Shivangi ran away from her house and, in 1982, they both had a court engagement.

The start of a time trial for young Shivangi after marriage

While Shakti’s family, as planned, embraced Shivangi, her own family distanced themselves from the pair and disowned Shivangi. They did, in fact, promise to never see her again. Shivangi has never returned to her parents home either. For several years the divide between the families persisted. Shakti Kapoor meanwhile made a name for himself in Bollywood and established himself with a firm foothold in the industry. The couple had two kids-Siddhant Kapoor and Shraddha Kapoor. Shivangi remained resolute in her decision not to visit her family but she acknowledged Shakti Kapoor as her son-in-law and two grandchildren after the birth of Shraddha and Siddhant.

The dispute over the Casting Couch that shook the Kapoor family

Things went well for the family before the name of Shakti Kapoor came up in 2005 in a sting operation conducted by India TV. The sting operation video showed Shakti asking the undercover reporter, who posed as an aspiring actress, for se-xual favour. India TV claimed that the purpose of this sting was to expose the Bollywood casting couch phenomenon. After this revelation, a major controversy erupted in Bollywood, and Shakti Kapoor was barred by the Indian Film and Television Producers Guild. They did lift the ban after a week’s time though. Shakti Kapoor maintained that he is innocent and is being framed.

“It did upset me and I did cry. I was younger then and did not know how to filter information. It was a moment we had to all be together. I know that I was most upset with the way people were talking about him. He is my father at the end of the day. And the way I know him and my family knows him, nobody else does. I get most affected if someone talks about my near or dear ones, including my friends or my dog.”

All is well that ends well

Being joined together like a family through these difficult times, the ties between Shakti and Shivangi have become deeper.

Now Shakti Kapoor, in an interview with TOI, revealed how his family coped with the crisis and gave him power, the whole family has come closer to one another:

“I used to walk to release my tension, and one night I walked 34 kms. So, you can imagine my plight! But, I was thrilled when my daughter woke up in the wee hours to welcome me at home and said ‘I want you as my dad in all the janams!’ My wife Shivangi told me that she loves me more than ever now! So, I am really blessed and feeling rejuvenated.”