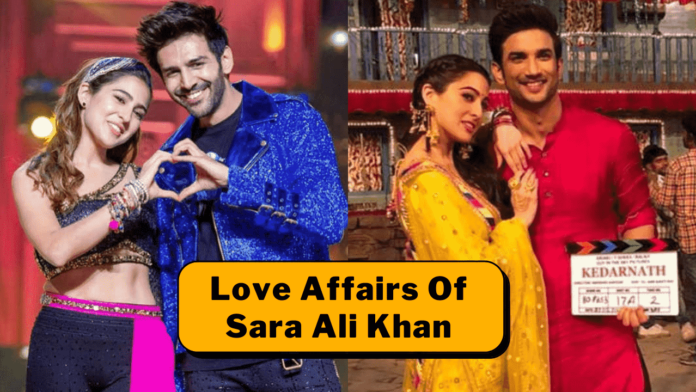 Sara Ali Khan is Saif Ali Khan’s daughter and belongs to the Pataudi Dynasty, which is considered one of India’s Royal Families. With her heavy fat to fit transformation, she has garnered the media’s attention. She made her film debut in Bollywood with Kedarnath, opposite Sushant Singh Rajput. Later, she collaborated with Ranveer Singh in Simba, a film directed by Rohit Shetty. In Bollywood, Sara Ali Khan has only made 3 films and two films have been released, but she is considered one of the industry’s leading actresses.

Although the whole debate of Starkid’s vs. Outsiders is opened up by her struggle to get movies, here we only talk about Sara Ali Khan’s love life, either confessed by the actress herself or reported by the entertainment news channels.

During her interviews, Sara Ali Khan is pretty bold and she has given a few sensational interviews on talk shows like Koffee With Karan and Kareena Kapoor. “She said,” I have dated one of the two film brothers, “during her talk session with Karan Johar on the show. Fans speculated she was referring to her relationship with Ishaan Khattar.

Ishaan fits the description perfectly, as he is the brother of Shahid Kapoor, a famous Bollywood actor. There were many incidents when paparazzi spotted Ishaan Khattar spending quality time together with Sara Ali Khan.
It was also rumoured that Sara Ali Khan and Ishaan Khattar were expected to make their debut in Bollywood with the Dharma Productions Hindi remake of ‘Fault in Our Stars’. Later, with Sushant Singh Rajput and Sanjana Sanghi in the lead roles, the film Dil Bechara was released.

It was very productive for the marketing team to rumour the relationship between the lead actor and the actress. When Kedarnath was about to be released, Sara Ali Khan and Sushant Singh Rajput were talking about the dating rumours of the fresh faces of Bollywood. Sushant had already announced his breakup with Ankita Lokhande, his longtime girlfriend, so it succeeded.

Sara Ali Khan has shown her frustration with the gossip and rumours so prevalent in the industry that her stepmother Kareena Kapoor Khan advised her not to date her first hero and her mother Amrita Singh used to pay a visit to the Kedarnath sets.

In Bollywood, Harshvardhan Kapoor only made two movies, but he is renowned in the industry for refusing good movies. In addition, as he is frequently spotted with various girls at Bollywood parties and events, he has a Casanova reputation in the industry. When paparazzi saw them together holding hand in hand and calling one another BABY, the rumours of these two dating each other began. It was also revealed when the photo started to get viral that the two meet very often and Amrita Singh does not like the slowly building relationship between Harshvardhan and Sara Ali Khan.

Sara Ali Khan has admitted that before making her Bollywood debut with Kedarnath, she was in a relationship with Veer Pahariya. Veer Pahariya is the grandson of Sushil Kumar Shinde, a prominent politician. She spoke about the old images of Sara Ali Khan with Veer Pahariya in her interview, which went viral on the internet. She also made it clear that Veer and Sara had broken each other up, and that he hadn’t cheated on her or broken her heart. It was also rumoured that the pair were madly in love with each other, and both promises and rings were exchanged.

Watch Out: Check Out These Famous First Time In The History