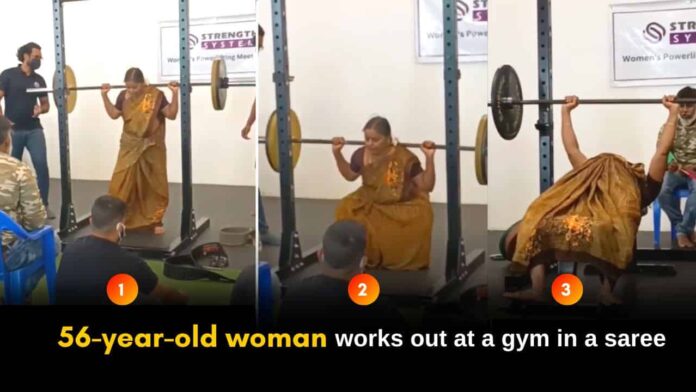 Creating healthy habits, such as regular exercise and a balanced diet, is the secret to ageing well. It is even more crucial to develop behaviours that keep you fit and active as you age. A 56-year-old Chennai woman recently revealed her motivational story on how she manages her health despite obstacles.

The 56-year-old woman may be seen exercising in a gym in a video that Humans of Madras and Madras Barbell posted on Instagram together. She can also be seen using dumbbells, heavy weights, and other gym apparatuses and equipment while donning a sari. The woman is exercising alongside her son’s wife. She is honoured by the staff members and other female gym members near the end of the video as well.

Additionally, the video features text supers that read, “I’m 56 now, and I still go to the gym. Even your clothing shouldn’t be a barrier to you pursuing your goals! My wife and I go to the gym frequently. I started going to the gym when I was 52. Everything began when I was given the prognosis of significant knee and leg discomfort.”

“My son did an extensive study on the treatment and advised me to start exercising. He is the owner of Madras Barbell. I exercise with my daughter-in-law, doing squats, powerlifting, etc. It did ease my agony, yes. We maintain physical fitness and good health as a family, “It went on to read.

The description for the video, which was posted a week ago, reads, “She’s 56. Then what? She performs pushups and powerlifting exercises while wearing a sari. Age is merely a number, as one of the strong, (young at heart), and inspirational mothers-in-law demonstrate. Her committed and encouraging daughter-in-law exercises beside her frequently as well. Isn’t this what they mean by “growing together”? Watching this is so motivating!”

The video has had more than 1.1 million views and 72,000 likes since it was shared. Many viewers were in amazement after viewing the motivational journey.

“This is the best example of inspiration anyone could ever receive. In addition to being inspirational, it also defies all gender stereotypes and emphasises the importance of never judging a book by its cover. Greetings to Aunty “a user said.

Another user stated, “I’ve heard a lot of stories lately, but this is by far the best! I’m hoping that this post will encourage a lot more women to put their physical and mental health first.”

“This is referred to as progress… She and her daughter-in-law are doing something wholesome rather than engaging in kitchen politics. At least from them, we can learn “said a third individual.