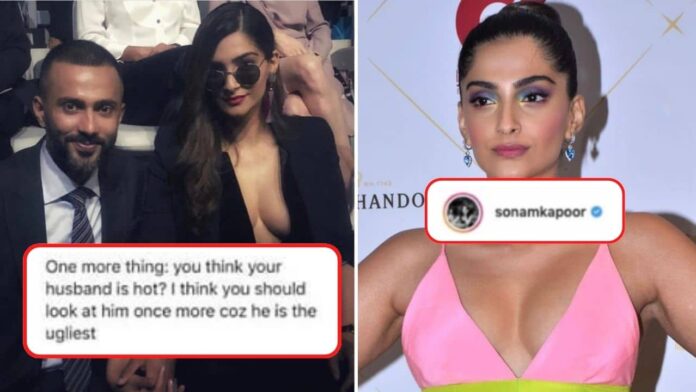 After actor Sushant Singh Rajput’s death, many star kids were targeted by netizens who listed nepotism that exists in the industry. Now the London-based fashionista Sonam Kapoor has fallen victim to it, with an American blogger calling her a product of nepotism, leaving the actress hurt. Like many actors who posted direct messages they receive on their social networking pages in recent times, Sonam shared a screenshot of it on her INSTA stories too.

The actress in her INSTA Stories described trolling definitely reflects the amount of hate they have for her in their heart and also this kind of message targeting her getting some attention on the social media site for trollers. Sonam’s INSTA Stories sharing the screenshot of these messages also wrote a note on it that read, “I hope you get followers through this post, as I know that’s what you wanted from my attention.” She also listed this as her last post where she will share about the hate she receives as she returns to her fabulous life she is fortunate to have without being bogged down by it.

On her INSTA Stories, Sonam also posted one more screenshot, where one of her followers urged her to take the good stuff from such posts and forget the rest. Look below at the INSTA Stories of Sonam.

Sonam and her husband, Anand Ahuja, are currently in London, showered with congratulatory messages on the launch of her husband’s new café.