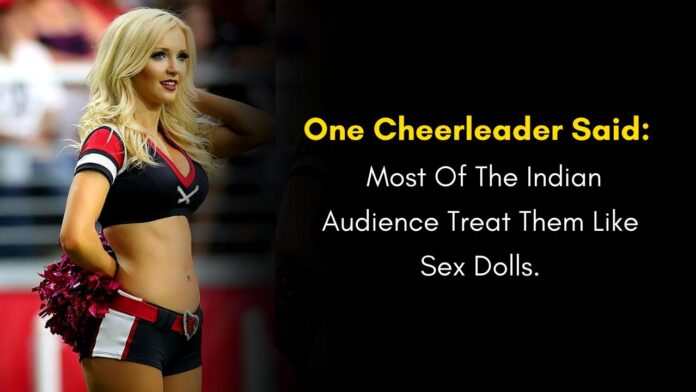 Indian Premier League or IPL as we call it is not just about Cricket, it is about Entertainment and Cheers Leaders play a very important role in entertaining the public. Dancing to the tunes of songs whenever a sixer or four is hit or a wicket falls, the cheerleaders have become one of the important reasons for the Indian Public to watch IPL. For the first time, a cheerleader working in IPL gave an online Interview which was organized by Reddit, the social networking site and it is called AMA- Shorthand which means Ask Me Anything.

The cheerleader didn’t make her identity public as it may lead to losing her job but she provided enough evidence to the Website officials to ascertain her authenticity.  She was asked a variety of questions as AMA attracted almost 500 respondents.

The Cheerleader described herself in these words:

I’m from the U.S.A and so far I’ve been loving India. I might be a rare Westerner in that I love the chaos here. People are living, kids playing cricket in the streets, goats and cows wandering around, people selling fruits and veggies on corners, I love it. It beats the closed off living you’ll find in major cities in the U.S. the U.K. or Australia.

I was cheerleading for an All-Star team and for my high school for 7 years, but that was 8 years ago now so admittedly I’m a bit rusty. This is only my third week in IPL.

My love for dancing and experiencing new things and new cultures brought me here. I actually get payed very little.

“Oh my goodness, the costumes are the biggest drama. I liked our old ones but apparently, the big boss’s 13-year-old daughter decided she wants to be a designer and designed our new outfits. We’ve been through 3 different cheer outfits now and I still hate the final outcome”.

aar_640 asked: “What is the biggest thing you hate about your job?”:

“I hate racism. Why is my team made up of 99% white girls? Why do Indians feel it’s ok to dress white girls up in skimpy outfits but they won’t let their fellow Indian women do it? It’s messed up.” 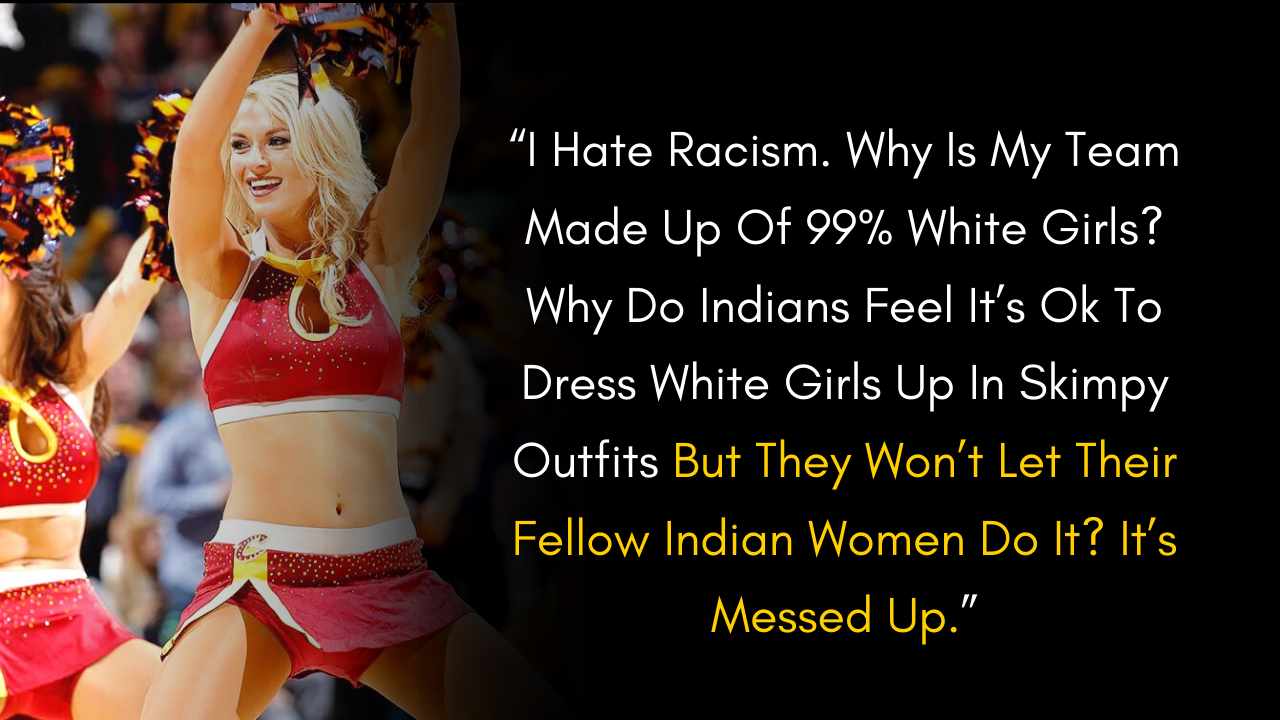 When asked by aar_640 whether how she tolerated the abusive language used by the audience, she said:

“for the most part, I can’t hear them. The music is loud enough and the accents are thick enough I’m mostly oblivious to the words. This doesn’t mean I can’t tell that there are some obvious slime-balls behind me. I try my best to ignore them. And I’ve made a personal rule for myself not to take pictures with fans unless they’re women or children. I’m not keen on becoming someone’s fap bate for the night.”

One respondent, ek_ladki asked about the working conditions in India, is she paid enough and is she getting respectful treatment?:

Conditions aren’t the best. If I were back in the U.S. I’d be shocked at the state of our toilets, changing rooms, and on occasions our hotel rooms.

Grumble wanted to know about the living conditions of cheerleaders in India:

The first two games they were more like 1-star hotels. Cockroaches, I saw a rat and rat droppings, it was pretty bad. But we quickly spoke up and realized our manager for that trip had been skimping us and pocketing the money he was saving on a cheaper hotel. Now they’re more like 3 stars. Perfectly comfortable but not over the top.

She told that Manager was fired after that when asked about the difference in the crowd in India and other countries, she said:

“The men in the crowd in India are much more intrusive. But you’ll find pigs wherever you go.” 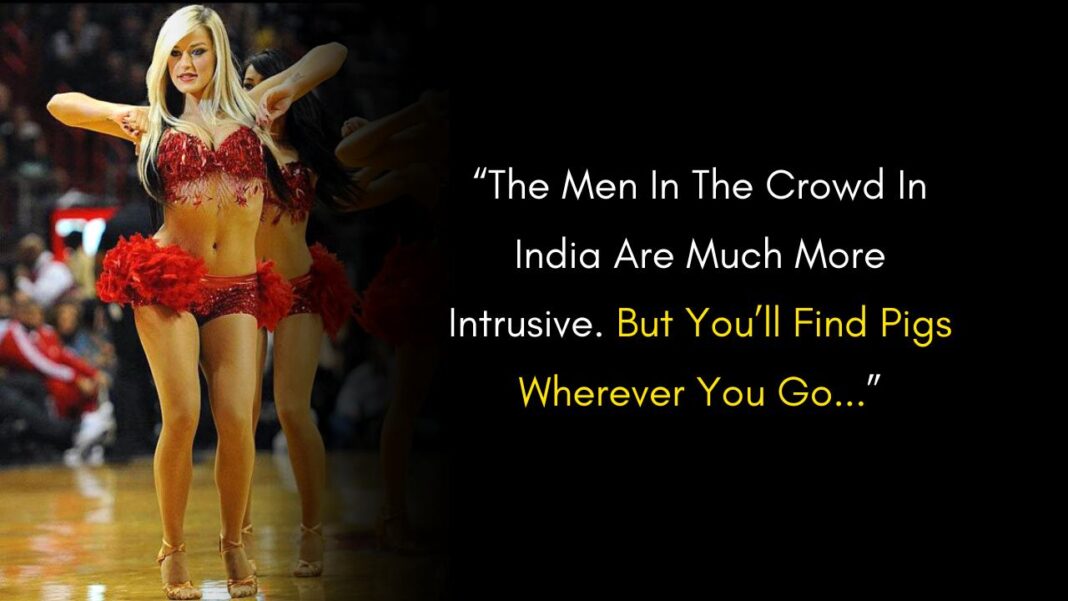 discr33t_enough wanted to know the most irritating thing during the game to which she replied:

pcmaniacxx wanted to know what is the funniest thing she has witnessed done by a fan?

Honestly? I put a blank stare on for the most part when I’m facing the crowd. There’s just so many nasty men making kissy faces and taking my picture that I tend to just block it all out. Often I’ll lock eyes with some nice people that are smiling and those are the people I’ll focus on for most of the game. So I haven’t really seen many funny things. If someone genuinely made me laugh though, that would be a welcome thing.

vareen asked, what advice would she like to give to all those kids who like to take cheerleading as a career?

“I’d advise not to take up cheerleading as an only profession. If you want to be a cheerleader, study dance and work on getting jobs in dance. Use your resume to apply”. 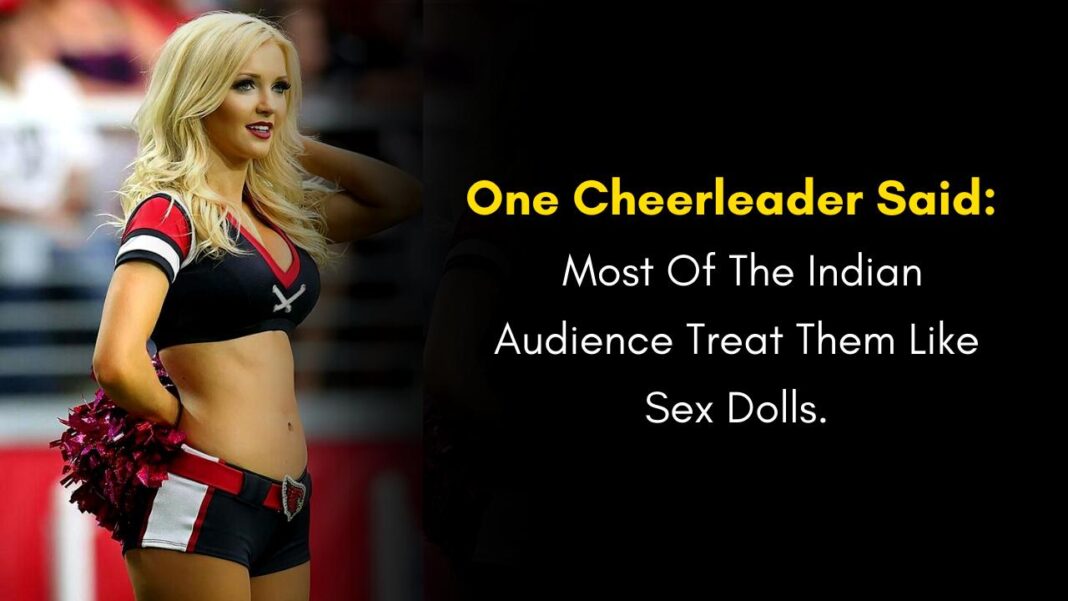 The heat gets annoying. I try to embrace it. The energy is just part of the job. We have to appear upbeat even if we’re exhausted.

The crux of the interview was that which she repeated a lot, she said: “the sexism is worse here by far”. not sleepy asked her is she a feminist and wanted her to give her opinion on cheerleading, especially in India.

I am a feminist, and I admit that I am bothered. When I danced and cheered in the U.S. I felt less like that. If you were to watch female dancers on Broadway, regardless of their outfit, you probably wouldn’t call them a sexual object. You’d call them a dancer. I went into this contract as a dancer, finding that I’m treated more as a sex object.

I try to be forgiving of human nature so I’m rolling with the punches. I also enjoy what I do regardless. But I wouldn’t renew this contract for another year unless things changed.

Now, what would you say about IPL? Naturally, people have a great craze for IPL and this season is not an exception to it but don’t you think that they should take care of everyone’s convenience and comfort? What they did is right or justified from any point of view? Share your views in comments!

Also, Read If Your Boyfriend Does These 10+ Things, It’s a Forever Thing