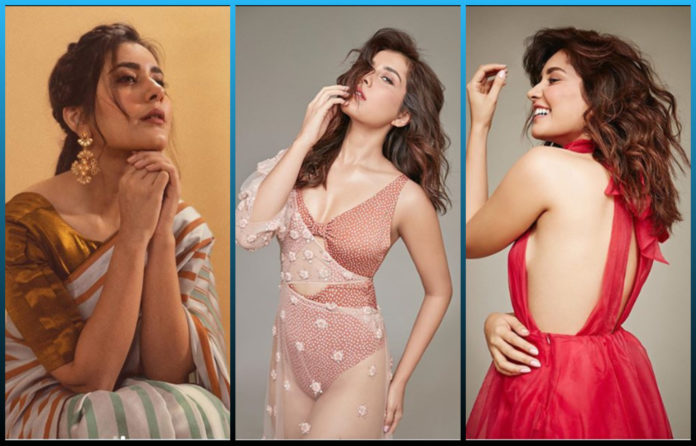 After her successful debut with ‘Oohalu Gusagusalade’ in 2014, bubbly girl Raashi Khanna has come a long way into the South cinema.

The 28-year-old diva has been active in Kollywood with many projects in her kitty, having featured in a series of Telugu films.

Recently, Raashi scored a hit named ‘Ayogya’ with the Tamil remake of ‘Temper.’ Starring Vishal in the lead role, the action-thriller saw the protagonist’s love interest play the Delhi beauty. The ‘Tholi Prema’ actress appears to be looking beautiful in a slender avatar after undergoing an incredible body transformation.

Her effortless portrayal as Sai Sirisha Prabhavathi in the directorial Srinivas Avasarala succeeded in striking the right chord with the audience and positioning herself as a gorgeous-looking actress with good emoting skills.

The bombshell looked super-hot in a red side-cut dress and a white, revealing ensemble in her latest posts on Instagram. Showing her enticing curves to perfection, Raashi’s alluring expressions are sure to make you weak in the knees.

Khanna made her debut with the 2013 Indian political spy thriller film Madras Cafe, where she played the role of Ruby Singh, the wife of an Indian intelligence officer Vikram Singh, portrayed by John Abraham, who was also the producer.

She had to undergo acting workshops before taking up the role. The film—particularly the story and direction—impressed most Indian critics.

Reviewing the film, Saibal Chatterjee of NDTV stated that Khanna “makes an impact in a brief but significant appearance”.

Impressed with her performance in Madras Cafe, actor Srinivas Avasarala approached her for the female lead role in his directorial debut Oohalu Gusagusalade, which also featured himself and Naga Shourya in the lead roles, which she signed in late October 2013 after considering many other south films, adding that the scope of performing made her sign the film. Khanna initially felt that it would be more of a dancing role with little scope for acting when approached for narration.

Khanna confirmed in early April 2014 that she made a cameo appearance in the Telugu film Manam, which had its theatrical release before Oohalu Gusagusalade, Oohalu Gusagusalade opened to positive reviews from critics and Khanna received praise for her work.

Sangeetha Devi Dundoo of The Hindu called Khanna an “actor with potential”, while Hemanth Kumar of The Times of India stated that she gave a “commendable” performance which helped the movie to some extent. The film was a commercial success at the box office.