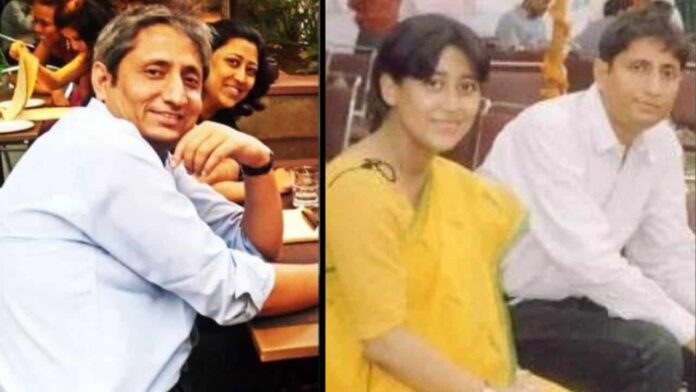 Ravish Kumar, a well-known journalist from India, is frequently referred to be the standard bearer of journalism, making him much more than merely a media figure in this nation. Millions of aspiring journalism and mass communication students around the country who want to have an impact on society look up to him as an inspiration. The renowned news station NDTV India’s senior executive editor was named Ravish Kumar. He left NDTV on November 30, 2022, as a result of Adani’s purchase. He had presented a number of shows on the channel throughout the years, including Hum Log, Desh Ki Baat, Prime Time, Ravish Ki Report, and many others.

On the professional level, Ravish Kumar is regarded as one of the most powerful individuals in the nation and the hero of journalism students. Few individuals are aware of his private life. Throughout most of his professional career and even today, Ravish has chosen to keep his family out of the spotlight. Initially a personal choice, it has since evolved into a crucial safety measure in light of the several recent death threats he has received. But there is simply too much to learn about Ravish Kumar and his wife Nayana Dasgupta’s romantic love story to ignore it. Before we get started, you should be aware of Ravish Kumar’s upbringing and early years.

The well-known journalist Ravish Kumar was born on December 5, 1974, in the small village of Jitwarpur in Bihar’s East Champaran district. The journalist graduated from Patna’s Loyola High School with a high school diploma. After that, he relocated to Delhi for his graduate studies and enrolled in the esteemed Deshbandhu College of the University of Delhi. Ravish continued his study by working toward a post-graduate credential from the IIMC in Hindi Journalism (Indian Institute of Mass Communication).

Ravish Kumar joined the news network NDTV in 1996 after finishing his studies, and the rest, as they say, is history. Ravish Kumar left NDTV on November 30, 2022, as a result of the Adani takeover. Ravish Kumar has won numerous honours for his uncensored and courageous reporting throughout his media career to date. However, the Ramon Magsaysay Award, Kuldip Nayar Journalism Award, Ganesh Shankar Vidyarthi Award, and Ramnath Goenka Excellence in Journalism Award are some of the most significant honours bestowed upon him.

The Senior Executive Editor of NDTV, Ravish Kumar, prepared for the civil services examinations while he was a student at the prestigious Deshbandhu College of Delhi University. Even though Ravish was a brilliant student in college, he was not a talkative person there. But when this quiet young man from Bihar first encountered Nayana Dasgupta at a college function, he couldn’t help but fall in love with her.

Nayana Dasgupta, a young woman from Kolkata, was studying for a BA at Indraprastha College in Delhi and then completed an MA at Jawaharlal Nehru University. Nayana and Ravish developed a relationship during her graduation as a result of their regular interactions, which quickly developed into love. According to media accounts, Nayana was the one who had assisted Ravish in picking up the English language. The much-in-love pair was soon covered in the colours of love as a result of their frequent meetings and in-depth intellectual exchanges.

Ravish Kumar and Nayana Dasgupta were very committed to one another, spending time together during their undergraduate years and assisting one another in advancing in their various jobs. Despite being aware that Nayana is a Bengali and Ravish is a Brahmin, the couple persisted in their romance and continued to date in the hopes that they would one day persuade their respective families to approve of their intercaste union.

Yes! Since Nayana Dasgupta was a Bengali and Ravish Kumar was a Brahmin, it was an intercaste union. After seven years of dating, the pair decided to be married and informed their families of their plans. But it wasn’t an easy task for them!

After dating for seven long years, Ravish Kumar and Nayana Dasgupta made the choice to tell their parents they were getting married. The pair knew they would face criticism, but they were confident they could convince people. The two families, however, firmly and bluntly rejected the proposition when the time came. Being unable to even consider being married to another person, was a difficult period for Ravish and Nayana. Despite Ravish’s best efforts, his family refused to approve of his desire to wed Nayana Dasgupta, thus he made the decision to flee for the love of his life.

Ravish Kumar said goodbye to his family after deciding to wed Nayana Dasgupta, his true love, who had severed all relations with him. No family members were reportedly present at his wedding, and Ravish undoubtedly gave up a lot for his love if the claims are to be true.

Following their nuptials, Ravish Kumar and his wife Nayana Dasgupta began their blissful marriage. While Nayana teaches history at Delhi University’s Lady Shri Ram College for Women, Ravish worked for NDTV. After a number of years of marriage, the deeply-in-love couple is blessed with two daughters, but there is no information online about them. The devoted parents have shielded their children from the spotlight. Ravish has frequently discussed his daughters in his interviews, saying that his rigorous job prevented him from spending a lot of time with them.