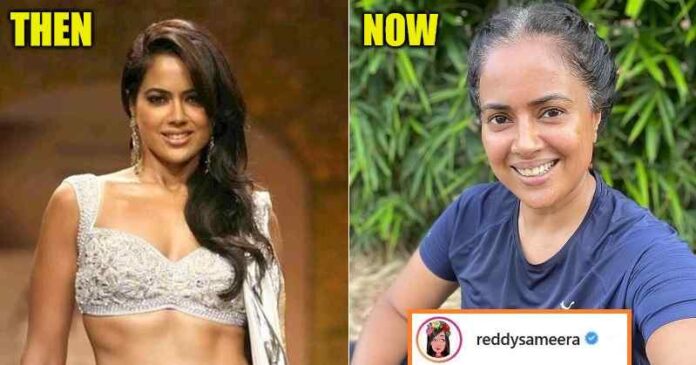 Actor and mother of two from Bollywood Sameera Reddy is changing the way people talk about fitness and encouraging her admirers to love their bodies. On Instagram, the actress frequently discusses wellness, mental health, and her own fitness journey. She just shared a remarkable talk she and her father had about age, body image issues, acceptance, and more on social media. It will inspire you to be fearless and unapologetic.

Sameera is one of the few Hindi film stars who freely talks about her changing physique and publishes postings about how she has learned to accept her flaws.

Sameera published a collage of her before and after photos on Instagram a few days ago. In one shot, a lot younger and slimmer Sameera is seen dressed glamorously in a golden saree, while in the other, she is seen wearing training gear and showcasing her not-so-toned abs.

Sameera posted the image above and said,

“Do you constantly comparing yourself to the person you used to be?” Redefining and not getting caught on what used to be is the healthiest thing you can do for your body and psyche. The world will continue to judge you, but you don’t have to be one of them. Continue onward. Don’t turn around. #imperfectlyperfect This fitness Friday, I’d like to be positive and thank my body for all of its help. #selflove #healing #bodypositive #fitness #fitnessmotivation #realmotherhood #fitnessfriday #letsdothis

Sameera recently uploaded a couple of images on social media that showed off her ‘white hair.’ She also included a long statement explaining why she only covers her white hair when she feels like it, not because of any social obligation.

Sameera uploaded the photo on Instagram with the message, “My father, who was scared that people would criticize his daughter, recently questioned me on why I wasn’t covering my hair.”

“My father questioned why I don’t cover my white hair. He was concerned that others would pass judgement on me. ‘What if they did?’ I replied. Is this a sign that I’m becoming old? It’s not pretty. Not well-kept. ‘Isn’t it appealing?’ I informed him that I am no longer paranoid about it, and that independence is exhilarating. I used to colour every two weeks so that no one would see the white line. Today, I take my sweet time and colour whenever and wherever I want. He inquired as to why I should be the one to change the subject. Why not, I reasoned. I’m aware that I’m not alone. When old mental processes are broken, the shift and acceptance can begin. When we can simply be with each other. When confidence may emerge organically rather than being hidden behind a mask or cover. My father was aware of the situation. As a father, I understood his anxiety. Every day, we learn something new and find peace in minor changes. #happy #acceptance #selflove #imperfectlyperfect”

On social media, the 42-year-old frequently shares her experiences and tribulations as a mother. Maine Dil Tujhko Diya, in which she starred alongside Sohail Khan and Sanjay Dutt, was her Bollywood debut in 2002. In 2013, she was last seen in the Kannada film Varadhanayaka.

Sameera Reddy, we hear you loud and clear.