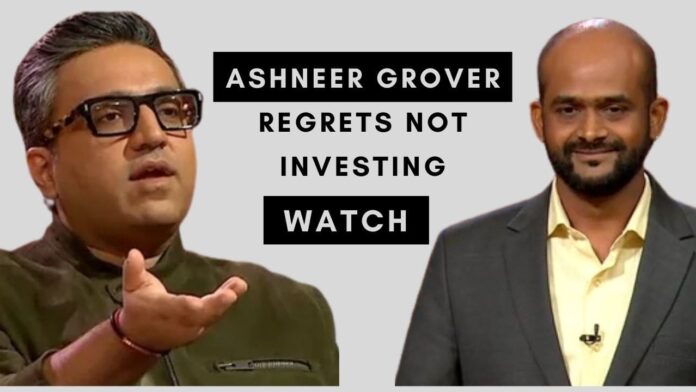 Ashneer Grover has returned. On YouTube, with comedians Rohan Joshi and Sahil Shah, rather than on BharatPe. And, in a video discussion with the famed comedians, he answered a slew of questions regarding his Shark Tank India stint, the bombardment of memes, and his ‘vacation,’ which he is thoroughly enjoying.

One of the most famous memes from the episode, as well as Grover’s response to it, stood out in the 50-minute YouTube video. Yes, we’re talking about Sippline, the glass mask, a pitch that elicited Grover’s legendary “Wahiyat product” diatribe.

During a part in which the comics asked Grover 30 questions, Shah asked the BharatPe co-founder a question that had been bothering him for a while.

“Do you have any regrets about not putting money into Sippline?” The others burst out laughing as Shah inquired.

Grover laughs as he replies, “For the loss of entertainment in my life.”

“I would be going insane with laughter if I had made the mistake of investing in this company and asking him (entrepreneur Rohit Warrier) to build five new products,” Grover adds.

Grover had lambasted the Sippline entrepreneur for his “wahiyat product” on the show and decided not to invest in the company.

“Is this some kind of joke? Do you consume a lot of alcohol? Where did you acquire the idea to put a mask on a glass, for example?” Grover’s remark caused his other judges to burst out laughing.

Grover also describes what ‘doglapan’ is — another of his internet-breaking rants – and stresses that there is no filter because he speaks in Hindi the majority of the time. Grover’s use of the word ‘dhanda’ instead of business has pleased the internet, and the trio explored other famous Grover memes and catchphrases.

Sippline’s founder, Rohit Warrier, has been regularly advertising his product on social media utilising examples from Shark Tank India. In short snippets, he has slammed Grover and ‘shark’ Aman Gupta.

Ashneer Grover has been entangled in a long-running feud with the BharatPe board of directors over allegations of financial mismanagement, which led to his resignation.

Along with venture investors Anupam Mittal, Aman Gupta, Namita Thapar, Vineeta Singh, Ghazal Alagh, and Peyush Bansal, he was a judge on Shark Tank India. Entrepreneurs could pitch their businesses to the sharks for funding in exchange for shares on the reality show.