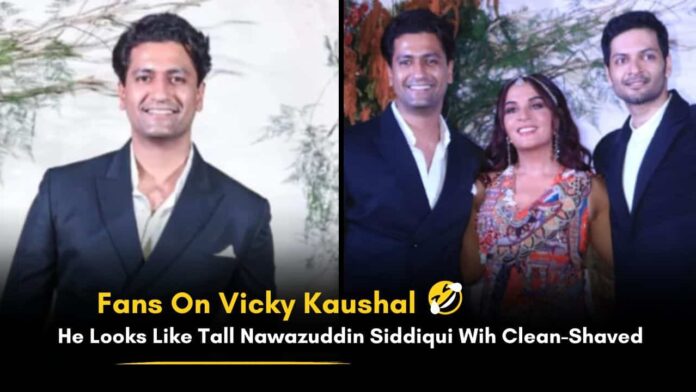 Any man can pull off the stubble appearance, but only real men can rock the clean-shaven look, so the saying goes. Others claim that a clean-shaven appearance is the most attractive among women. It seems like the discussion is perpetual.

Vicky Kaushal, however, went out looking clean-shaven, and no one recognised him.

He was there at Richa Chadha and Ali Fazal’s wedding reception party. Vicky and Richa co-starred in Vicky’s first film, Masaan, for those who are unaware.

As soon as the photos appeared, many people thought Vicky Kaushal was Nawazuddin Siddiqui.

On Reddit, someone wrote, “I always assumed beard would age people but Vicky proved it was wrong he looks far more gorgeous in the beard.”

A supporter remarked, “He looks more like the Nawazuddin and Vijay Verma combo.”

Another one added, ” With sprinkles of Kenny Sebastian.”

“I assumed I was the only one who thinks he resembles a taller, bearded Nawaz,”

“He looked fantastic in Sanju and Masaan was too clean-shaven, wonder what happened,” said another fan.

Vicky recently emailed Richa Chadha and Ali Fazal her best wishes in advance of their nuptials. He posted a picture of the couple on his Instagram Stories and added the caption, “Congratulations to the couple for coming together as two incredible spirits. Saara pyaar bohot! @alifazal9, @therichachadha.”

For those who don’t know, Richa and Ali met while working on the 2012 movie Fukrey. They quickly grew close and fell in love as well. Since 2020, they have been preparing for their wedding. Even though they had a venue reserved, the epidemic caused them to modify their plans. They have been preparing for their wedding ever since, but new Covid-variants have consistently caused them to alter their plans.

When Richa Chadha and Ali Fazal registered their marriage, they had been cohabiting for 2.5 years. A spokeswoman said, “They have held their wedding receptions and festivities in Delhi and Lucknow and are now holding the last function tonight in Mumbai.