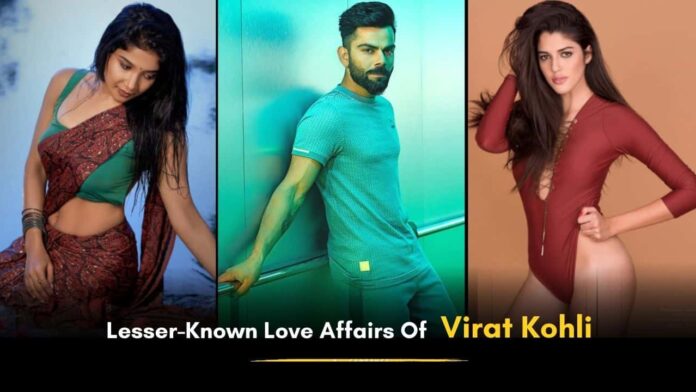 Following the T20 World Cup series, cricket fever has taken over our minds. While we were disappointed by India’s initial performance and start to the match, the stakes have now risen to the point where each of us is concerned about India reaching the semi-finals. We’re all waiting to hear the ultimate decision on bleeding blue. Regardless of the scenario, we continue to love the crew and wish them the best of luck in their future pursuits.

When it comes to the sassiest player in the world and the current captain of India, Virat Kohli, the cricketer has always been known for his amazing looks and character. After marrying his true love, Anushka Sharma, the couple just welcomed their first child, Vamika. His prior love affairs and romances are kept hidden from the public eye, despite his status as one of the best batters of all time. As a result, we’ve compiled a record of prior love affairs and suspected romances in this piece. Take a look at this:

Sakshi Agarwal is an Indian actress best known for her modelling and Tamil film roles. The actress began her career as a marketing consultant after securing employment in a variety of other regional languages. When she came across a few modelling opportunities, though, she didn’t look back and has been shining brightly ever since.

The actress gained the attention of the public after her name was linked to Indian cricketer Virat Kohli. Their relationship, however, did not endure long, and they soon separated ways. According to reports, Virat began dating the actress during the early stages of his cricket career, and she was the cricketer’s first love. The couple ended their romance after only dating for a short time.

Who hasn’t heard of Tamannaah Bhatia, the South actress with the hypnotic beauty and great skills? The actress, who began her career at the juvenile age of 15, is regarded as one of India’s most versatile actresses. Tamanna Bhatia is a Sindhi Hindu actress who has performed in various blockbusters. She made her breakthrough in 2005 with the film Chand Sa Roshan Chehra, catching the eye of producers and establishing herself as one of the industry’s most talented actors.

While we are all aware of the actress’s abilities and traits, the majority of us are unaware of her previous relationship with Indian cricketer Virat Kohli. As they grew closer during the filming of a cell phone commercial for Celkon, different rumours about their relationship began to circulate. Their romance, however, could not survive long because to the differences produced by Virat’s relationship with Brazilian model and actress Izabelle Leite, which led to the duo’s breakup.

Sarah Jane Dias, a former beauty queen, actress, VJ, and host, was named Femina Miss India in 2007. Sarah began receiving invitations to host Channel V after winning a reality television competition. The actress’s stunning beauty made admirers drool over her, and the cricketer fell in love with her as well. The actress became a fan favourite after giving an outstanding performance in the recently released series Tandav.

In terms of her connection with the cricketer, the two met at a common party and fell in love. During that time, Virat invited Sarah to the 2011 World Cup to cheer him up. However, due to other responsibilities, the latter was unable to attend the game and planned to make amends by meeting him later. After dating for a short time, their relationship came to an end during the 2011 West Indies match.

While we all wish this couple had made it to marriage, the news of their breakup has left admirers devastated. This Brazilian model-actress was seen inclining towards Bollywood and making her way out to India, which became the reason for Tamannah and Virat’s breakup. The actress became close with Indian cricketer Virat Kohli after working in many Telugu and Hindi regional films. After meeting at a party, instant chemistry developed between the two, causing them to become even closer.

Various accounts of couples observed sharing intimate moments in Singapore began to circulate on the internet. After dating for two years, the couple abruptly ended their relationship, which was a heartbreaker for the viewers. When asked about it, the actress said that Virat was her first friend in India, and that the two had a solid relationship for two years before calling it off because they didn’t want to make it public.

Cricketer Virat Kohli was in a relationship with Sanjjanaa for a short time after falling in love with a South industry actress. The couple was seen on multiple occasions going for long drives and tennis matches with the actress. When asked about it, however, the actress denied being in a relationship and stated that they were “simply close friends.”

Yes, you may be surprised to learn that the latter was also linked to Rohit Sharma’s wife, Ritika Sajdeh. This incident occurred in 2013, as the squad returned from their Zimbabwe trip, according to a post by a reputable source. She was even seen meeting Virat Kohli during the 2010 IPL season, before meeting Rohit Sharma.