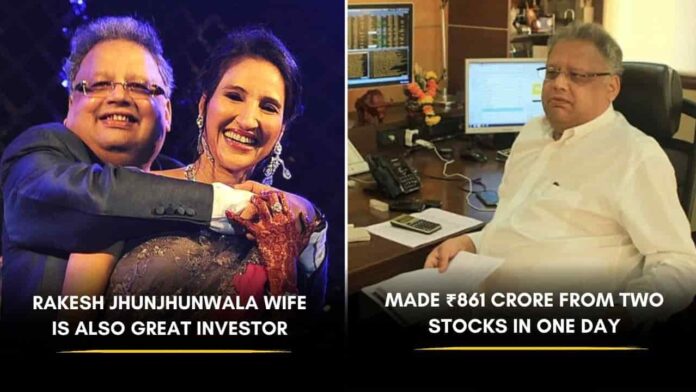 Rakesh Jhunjhunwala dubbed the Indian Warren Buffett. Jhunjhunwala’s journey to becoming a stock market specialist has been nothing short of thrilling despite being born into a middle-class household.

When Jhunjhunwala was a college student in 1985, he began trading. He put 5,000 rupees of his own money into the stock market. For those who invest in the stock market, he has shown to be a true inspiration.

Rakesh Jhunjhunwala is ranked as the 48th richest person in India by Forbes Magazine, with a net worth of $4.6 billion (about Rs. 34,387 crores) as of 2021. Jhunjhunwala claims that after hearing his father talk about the stock market, he became interested in it. Since the beginning of his career in stocks, he has taken calculated risks.

1.  Rakesh Jhunjhunwala Was fascinated by the stock market early in life

Rakesh’s father frequently discussed money, taxes, and stock markets at home because he was an IRS agent who served as the commissioner of Income Tax. Rakesh, a 12-year-old boy, became intrigued by markets as a result. Rakesh was unaware at the time that his curiosity would lead him to unexpected areas.

Rakesh’s father, like the majority of Indian fathers, only gave him permission to pursue his passion after he had earned his professional degree. After earning his CA degree in 1985, Jhunjhunwala told his father that he was desperate to start trading stocks. Rakesh’s father responded, “Don’t ask anyone for money; do it on your own.” Rakesh began trading stocks with his 5,000 rupees, which he had worked hard to get.

Rakesh is a food enthusiast who enjoys dosa, street food, and Chinese food. He is a Mumbaikar at heart because of his fondness for Pav Bhaji. Rakesh, happily, prefers the Pav Bhaji his wife Rekha makes at home over the street version. In addition to eating, he likes to watch cooking demonstrations.

5. Rakesh Jhunjhunwala is a big fan of Bollywood. Venturing into Bollywood

Bollywood is a huge passion for Rakesh. He has worked on the production of movies including English Vinglish, Shamitabh, and Ki & Ka. He founded the online promotion company Hungama Digital Media in 1999 along with four other partners, and he currently serves as its chairman. Hungama Digital Media Entertainment Pvt. Ltd. was the new name given to it thereafter. Hungama Music and Hungama Play will be accessible on OTT platforms starting in 2021.

6. Rakesh Jhunjhunwala Believes In Giving back to society

Although Rakesh claims not to be a philanthropist, he does aspire to be one. On his 60th birthday, he has promised to donate 25% of his assets, or Rs. 5,000 crore, whichever is less. His late father, who constantly encouraged him to do good deeds, passed away in 2008. Rakesh began donating 25% of his dividend income to charity starting in 2008.

7. Being the king of dividends

There is a sea of stocks in Rakesh’s portfolio that provide dividend returns measured in crores. Here are some figures: Rakesh owns approximately 3.93 billion shares of the Titan Company, which announced dividends of 4 rupees per share in August 2020. That amounts to almost Rs. 15.7 crores in dividends. Then, he and his wife Rekha collectively own around 39.75 lakh Crisil shares. In 2020, it paid dividends of Rs. 19 per share across three interim periods. That is almost Rs 7.5 crore. Additionally, before March 2021, there may be another dividend handout.

Visit the relevant Stock Page on Tickertape’s website to find out how much each listed firm pays out in dividends. The ticker tape app can also be opened, searched for the stock in, and the Events tab checked.

8. Rakesh Jhunjhunwala is One of the top-rated stock market investors in India

Rakesh Jhunjhunwala has built a strong multi-bagger portfolio over time by spotting jewels. He became one of the wealthiest stock market investors in India as his net worth increased from roughly Rs. 9,168 crores in March 2020 to Rs. 16,266 crores in January 2021. He has been dubbed “the Warren Buffet of India” and “the Big Bull of the Indian Stock Market” as a result of it.

At the end of the June quarter, Jhunjhunwala had a net worth of $5.8 billion, making him the 36th richest person in India.

The property was formerly a 14-story apartment building that was acquired by 61-year-old Jhunjhunwala and his wife Rakhi in two phases. They purchased seven floors in 2013 and the remaining seven in 2017. Since then, work has continued because the property is set to include every luxury the family might desire.

Where does Rakesh Jhunjhunwala stay?

Rakesh Jhunjhunwala constructed a massive, 13-story mansion in Mumbai that is 70,000 square feet in size. At Malabar Hill, there was a small, opulent structure known as Ridgeway Apartments. There were just 12 flats in it, and two major international banks owned them. Top bank officials remained in the structure.