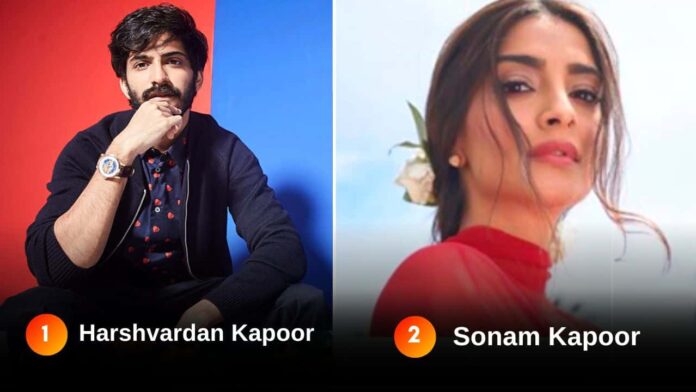 Bollywood celebs and their opulent lifestyles are nothing new to us. Some of them have created entire businesses from nothing, while others have benefited from support from their famous parents.

Star kids shouldn’t be judged for coming from wealthy families or for having a head start in the industry, but it’s perplexing to see them ignore their status when they do.

Here are six instances where Bollywood celebs disclosed their “struggles” without considering how insensitive they sounded:

Anil Kapoor’s son, Harshvardhan Kapoor, denied having any privileges in life in an interview with Mashable India and went on to discuss purchasing a car on his own.

Because his parents are unwilling to cover his expenses, he said he was trying to buy a used Lamborghini for $1 crore rather than a brand-new one that would cost him roughly $3 crore. Added he, “My folks are not interested in footing the bill for my trash. It is the depressing truth of my life.”

As expected, people weren’t happy. check out one of his fan’s reactions;

Sonam Kapoor, the sister of Harshvardhan, is famed for hiding her privilege in a number of interviews. She spoke about being a famous kid in an interview with Arbaaz Khan on his chat show, Pinch, in a way that would make you go, “WTF?!”

“My father didn’t come from an illustrious family. He has worked in the industry for 40 years and he has worked really hard only for his children if I don’t take advantage of his hard work, which he has done for us, I think that will be a little disrespectful towards his work because every man or a woman, a mother or a father works for their children.”

Ananya Pandey’s discussion about her struggles in Bollywood on Rajeev Masand’s talk programme gave rise to memes. She uttered:

“My dad has never been in a Dharma film, he never went on Koffee With Karan. So it’s not as easy as people say. Everyone has their own journey and their own struggle.”

When businesses resumed operations following the COVID pandemic’s lockdown, Saif Ali Khan made an odd comparison between acting and being a doctor fighting a dangerous illness on the front lines. He described acting as a high-risk career, saying this:

“You know, actors can’t wear masks and the film set is a very dangerous environment at this time. But most people I have worked with have made really big efforts. People are trying their best, but it’s still dangerous…During the lockdown, we quietly sat at home for six months, wasted our lives and lost our time. But now when the government is saying go out and work to support the economy, we are on the frontline again. It’s a high-risk profession, almost like working at a hospital.”

Saif’s wife Kareena Kapoor addressed nepotism in her controversial interview with Barkha Dutt and asserted that fans had the ability to make or ruin stars. She also said that although her struggles weren’t as severe as those of individuals outside the industry, she had experienced her fair share of hardships:

“It might sound weird but probably my struggle is there. But it isn’t as interesting as somebody who comes with just Rs 10 in his pocket in a train. Yeah, it’s not been that and I can’t be apologetic about it.”

Clips from this conversation were shared on social media during the Laal Singh Chaddha boycott wave to make fun of her haughtiness and disdain for outsiders in Bollywood.

Rohit Shetty responded in a way that many found shocking when asked about the decision to cast Sara Ali Khan in Simmba. Star children are frequently criticised for having airs and living in isolation from the outside world. The nepotism machine is in full swing when casting fresh actors, as seen when a seasoned director treats a star child differently just because of her ancestry.

“She’s become a star so I can say this. ‘Sir, please give me work’. She’s Saif Ali Khan’s daughter. She’s the daughter of Amrita Singh and Saif Ali Khan. Walking alone to my office and pleading a director to give her work. I had tears in my eyes, I told her to do my movie.”

Sara Ali Khan, though, has consistently insisted that she recognises her privilege as a famous child.