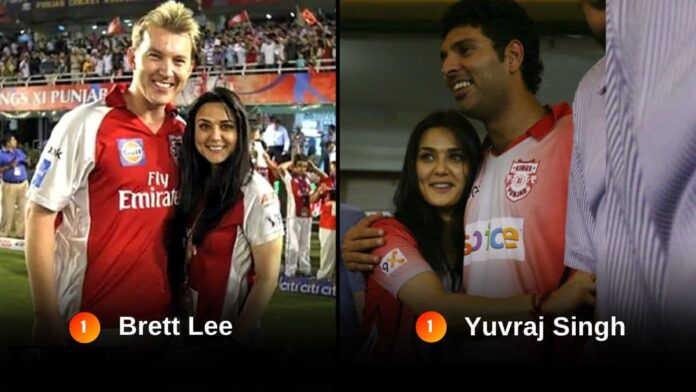 Our film business is renowned for its romantic relationships. Ironically, so many couples are falling in love every other night. Numerous unsuccessful celebrity romances that we read about have been overshadowed by fame and glamour. Our dimple girl Preity G Zinta is another entry in the book of unsuccessful relationships. Every time a new love knocked on her door, she embraced her and remained steadfast in that relationship. She finally understood that fate had other plans for her, or perhaps we could say that someone else was made for her.

Preity Zinta and actor and model Marc Robinson were said to be more than just friends by several publications, but we never got a confirmation statement from the couple. Preity first met Marc for modelling assignments before entering the film industry, and a spark immediately developed between them. Like their relationship, their breakup was also kept a secret from the public. However, that explains why we were never given a cause for their breakup. Preity frequently tells people how Marc assisted her in progressing in the field. She previously stated that she had only a few memories of Marc and will carry those with her always.

The on-screen and off-screen relationship between Preity Zinta and Abhishek Bachchan surprised the industry. Many people have noted their chemistry in Kabhi Alvida Naa Kehna and Jhoom Barabar Jhoom in particular. When questioned about their connection, however, Abhishek and Preity consistently referred to one another as their closest colleagues.

Preity, the dimple girl, was once said to have had a brief romance with Australian cricket player Brett Lee. Even though Preity consistently rejected the rumours, Brett Lee was very honest in her expression of her love for Preity. While enjoying her covert dates in Mumbai, Brett Lee and Preity were also caught on video. In an interview, Lee went on to explain that Preity was a genuinely sweet girl whose work he absolutely adored.

Preity Zinta and Yuvraj Singh have a habit of explaining why they teamed up for the IPL. The top batsman for Preity’s KXIP team was Yuvraj. Photos of them revelling in their victories and spending time together soon became popular news. However, neither of them ever accepted the rumours of a connection.

Then the man showed up who everyone believed Preity was meant to be with. Preity and the business tycoon Ness Wadia have made their relationship public after a few years of simply being good friends. The two could be seen together everywhere, starting with a gala function. The media remained sceptical despite the couple’s frequent holding hands while posing for photographs, cheek kisses here and there, and unusual PDA. But as everyone’s fantasising about the couple’s fairy tale wedding, they’re “too wonderful to be true” relationship reached rock bottom. After dating for five years, Preity accused Ness of torturing her mentally and physically in 2009. The couple reportedly broke up in 2009 after she allegedly received a slap from Ness Wadia at a party.

When Preity reported Ness for harassment and abuse in 2014, things went south. The report gained attention for several days and spread like wildfire. She further stated that Ness had often felt humiliated by his persistent behaviour toward her, particularly in public. Finally, Ness Wadia brought a counterclaim against Preity, and the two parties went to court together.

Preity had cited a few friends as witnesses while arguing the case against Ness. According to numerous stories, Ness’ close buddy Gene Goodenough made the decision to support Preity Zinta at that time. Gene is employed at the hydroelectric power firm in the US as its Senior Vice President. Gene and Preity made the decision to become a couple after some time. Preity hid her intentions to be married. Preity and Gene were married on February 29, 2015, in a small ceremony in Los Angeles. Only family members and close friends were present at the wedding. Preity and Gene, however, hosted a sumptuous industry celebration in Mumbai.

Preity and Gene are now frequently seen together in India during IPL games. We wish the couple a good, long marriage because they both appear to be quite content.